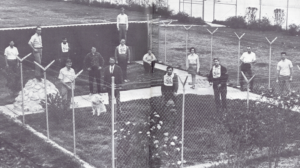 In the spring of 1969, the University welcomed its first mascot, Mingo, a fluffy Samoyed. Later, in 1999, HBU was gifted with its first-ever Husky, a dog named Wakiza “Kiza” (1). At her passing in 2010, HBU welcomed Kiza II, and at Kiza II’s retirement, the school brought in Kiza III at the end of 2017.

Kiza is a regular around campus, interacting with students and visitors, and appearing at sporting and recruiting events. She’s captured many hearts with her warm demeanor. Integral to her care is the HBU Sled Team.

The Williams and Trozzo families established an endowment for the care of the University mascot several years ago. Jared and Payne Trozzo have continued the program to honor the memory of their mother, Dawn Trozzo, in collaboration with their father, Clay Trozzo, MBA ’96, and grandparents, Dr. Diane, ’93, and Stanley Williams. The scholarship program supports students who serve on the Sled Team in the mascot program. 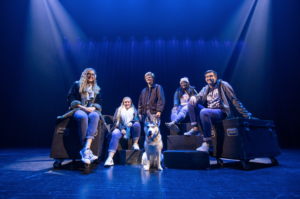 Nathan Ewest, Head Musher: “Back in May of 2020, I took over the role of head musher from Carissa Hadsell. Since then I have been taking care of Kiza. During the semester I am responsible for making sure Kiza goes to events, goes on walks, attends vet and grooming appointments, etc. I participate in the Sled Team because I enjoy seeing the students and faculty interact with Kiza. With how close Kiza is to myself and my family, we think of her less as the HBU mascot and more as a member of our pack. I think that Kiza’s significance is twofold. On one level, I know that many of my fellow students are missing their dogs throughout the semester, and seeing Kiza reminds them of home. On another level, I think that Whit Goodwin, associate provost for Student Life, phrased it well when he said that Huskies are hard-workers, good-natured, and smart – meaning they accurately represent many of my fellow students at HBU.”

Jayda Dotson, Senior Musher: “I have been on the Sled Team since the second semester of my freshman year. I am a musher who takes Kiza on walks during the week and to events where she is wanted to be seen, such as sporting events. I participate because I, for one, love animals, and Kiza is the sweetest and sassiest pup I’ve ever met. I find it fun and rewarding to have the privilege of showing off our awesome mascot and being able to see so many HBU traditions and events that I didn’t know existed while having her alongside me. I think I can say every one of us on the Sled Team has our own special bond with Kiza. Having been around to see her when she was first introduced to the HBU pack, it’s been so exciting to see how much she’s grown and blossomed here. She loves to greet me by howling, jumping on me, and giving me lots of wet kisses! I think Kiza is a symbol that while she, like HBU, may be small, we are all mighty, feisty, and fun to love. Kiza loves everyone she comes in contact with, which just goes to show how HBU is with students; we’re all one big family and always here to support each other through everything.”

Cole Lemmons ’20: “I joined the Sled Team in 2017. I was mostly responsible for walking Kiza about an hour each week and taking her to sporting events. This is to allow the students to see Kiza on a regular basis and to allow Kiza to stay young and active. I started participating in Sled Team because my older stepbrother was part of it before me, and I love animals, but it grew into so much more for me. It really helped me become more social and involved in the University life. I loved how many people I recognized on campus when I walked Kiza, even if it just meant exchanging smiles every once and a while. I absolutely loved taking care of Kiza, and I can tell she loved me back. Every time I came to pick her up, she jumped all around the apartment, licked me at least 1,000 times, and barked like crazy; it’s great. I think having Kiza symbolizes so much to the students of HBU. She is an example that HBU is not a distant school. The University is actively participating with their students and developing a community; having a mascot that you regularly see and get to interact with is a great reminder of that. On a less deep level, Kiza also has a ton of personality and loves attention, so she’s great at relieving stress for those she sees who are studying.”