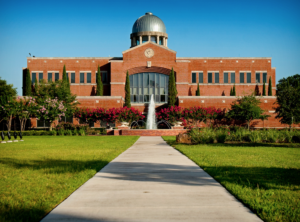 When Dr. Robert Sloan became the HBU president in 2006, he brought his visionary leadership. The University was nearing its 50th anniversary, and several years into the new century, Dr. Sloan and others felt it was time to set a fresh course for HBU’s continued success and growth. Creating a University vision was proposed – one which would chart a path to 2020. It was a year that seemed a distance away, but one that would be a significant point in history.

Dr. Hunter Baker remembers that time well. He joined HBU as a director of strategic planning, special assistant to the president, and an assistant professor of political science, in 2007. The season followed a time of paring down in University history. Practical needs had been the focus for a time, Baker said. Dreaming big again took a shift.

Baker, now dean of the college of arts and sciences for Union University, remembers, “Dr. Sloan had this vision that HBU could really determine what it means to be a Christian University in a major US city. Another big thing was to make the University sort of a cultural center for Christians in the city for people to associate HBU with the arts, with culture, as a place of debate and intellectual undertakings.”

Dr. Sloan hosted forums in which faculty, staff, alumni and supporters shared their ideas. “Anybody connected to the University had the opportunity to come to those meetings and people did. There was a great deal of interest,” Baker said. “Dr. Sloan and I would madly take notes.”

From the conversations, Baker boiled the key topics to nine to 10 main themes. “Then I started thinking about the campus and there’s the 10 columns, the 10 pillars on campus,” he said. “And I thought maybe these themes that have come out of the meetings are the ‘Ten Pillars.’”

With a back-and-forth exchange of ideas with Dr. Sloan, the points were completed. They included addressing academics, the arts, the surrounding community, the centrality of Christian faith, recruitment, the Houston community and more. The final version was adopted by the HBU Board of Trustees in February 2008.

“I looked at it as an adventure,” Baker said. “It was a tremendously exciting time to take some of the first steps toward the future and to think in terms of the Kingdom of Christ and what part we could play in our calling as a University.”

Charles Bacarisse, vice president of major gifts for HBU, was drawn to the University in 2008 precisely because of the vision outlined in the Ten Pillars. “Hunter handed me a copy of the Ten Pillars Vision and he said, ‘Read this. If you can’t get excited about coming to HBU after you’ve read this, you don’t need to be here.’ That was a Friday. I took that document home and read it over the weekend and was so enthralled,” Bacarisse said. “I followed my wife around the house reading parts of it. I could not get over the fact that an academic institution would create such a strong declaration of principles and a guidepost for where we want to go as a Christian institution. I could so appreciate what this vision was calling the University to accomplish.”

Like for Bacarisse, the Vision served to inspire potential faculty and staff members, students and supporters. The tenets provided the outline of what success would look like, and how the University would reach further than it ever had. It gave an outlet for the giftings and interests of employees, students, alumni and friends.

Challenges, Successes and Looking Ahead No one foresaw how necessary a guiding vision would be to light the way forward for the University like a beacon in a storm. A few months after the Ten Pillars Vision was made official, Hurricane Ike tore into the Houston area and damaged the HBU campus. For a time, the iconic Brown Administration Building was no longer a central gem of campus, but an uninhabited eyesore surrounded by a chain link fence. Other areas of campus had to be repaired.

Bacarisse remembers, “It really impacted our recruitment of students and really challenged the HBU community. We were first hammered by Ike, and then the world economic crisis hit. We had these amazingly challenging headwinds, but we never lost sight of the vision in the storm. I give tremendous credit to Dr. Sloan and the University leadership.”

Some of the results of The Ten Pillars implementation included the establishment of the Honors College, the realization of the University Academic Center to house fine arts, the recruitment of world-class faculty members, the implementation of doctorate programs, the reentry of athletics into Division I status, the start of a football and beach volleyball program, and the development of The Pillars retail area adjacent to campus. The results of the vision are quantifiable in some areas, but immeasurable in others, as HBU has grown in influence in the Houston community and beyond.

The Ten Pillars Vision proved to be much more than a collection of ideals. “A lot of times people put together a university vision and you go through the exercise and you make a big hullabaloo and it’s over,” Baker said. “But this one has been used as a guide and a direction to strive toward. I think the University has made progress on every single one of the points.

The vision is the spirit of the place: ‘This is what we want to be, this is what we’re striving toward. If you also want that, then come and join us.’ I think several people were drawn by the vision and still are.”

In October 2019, the University compiled the results of the accomplishments toward the Ten Pillars Vision in the last dozen years. The results were telling; major strides were made in every area.

With so much to celebrate, University leadership again visited the idea of a new vision for 2020 and beyond. In the fall of 2019, Dr. Sloan again held listening sessions to determine what the future of HBU will look like. Plans moving forward are being formulated.

Bacarisse said of the Ten Pillars Vision: “It was an aspirational vision when we adopted it and it remains aspirational today. It doesn’t really expire. It calls us to big things. We are amazed at what God has done as work has begun on the next vision.”

Rita Tauer, HBU associate provost for academic operations, said, “Our current 10 Pillars Vision has done a beautiful job of guiding the University over the past 12 years. I am eager to see the results of the research done to prepare the new University vision going forward.”

While no one can perfectly imagine the future, leaders are creating a plan that bolsters the success of HBU, students and alumni, and continues the success of a University 60 years in the making.

“Houston is a special place to run a Christian university,” Baker said. “There’s a lot of big cities in America where the city would not necessarily be that supportive of a school like HBU, but I think that Houston really has been ever since the beginning. I think HBU is much more well-known now than it was before the Ten Pillars Vision was enacted. I think the University has made progress on every single one of the Vision fronts.”