For once, the Curmudgeon found a film about which he cannot spew venom even though it was the target of considerable vituperation in 1960, Burt Lancaster’s version of Sinclair Lewis’s “Elmer Gantry.” Sixty years later, the film still packs a punch and it is easy to see why many found it offensive. The fledgling curmudgeon saw it between his freshman and sophomore years; his parents were reluctant to let him go, yet later praised the film. 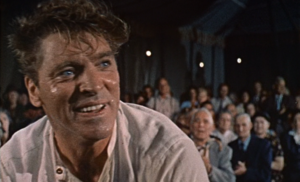 In the 1920s, traveling salesmen were the subject of many off-color jokes, and Lancaster is at his smarmiest when he shows young Elmer as a disreputable traveling salesman who discovers that he can be a very persuasive fundraiser. The early scenes also make it clear that he is a brutal fighter and is totally amoral where women are concerned. The truth about his sordid past is revealed even though the audience does not see at first how that past will catch up with him.

Elmer finds himself smitten with a female evangelist, Sister Sharon, and worms himself into her organization and practically takes it over. He is lured by the money he sees in the offering plates, but he also has his heart set on Sister Sharon. Jean Simmons is very effective as a female evangelist and shows her to be almost as calculating as Elmer, but far more spiritual. Her supposed ability to heal leads to one of the more dramatic moments.

Lancaster is extremely effective in the scenes when he mesmerizes the crowds who pour in to hear Sister Sharon. The question, throughout the film, is whether Elmer might actually believe anything he says. There are some scenes in which Lancaster seems demonic in his intensity. The most intense scene involves Elmer working a congregation into a frenzy; some members of his mob want to kill someone while others just want to burn and smash.

Just at the moment of his greatest “triumph,” Nemesis, in the form of Shirley Jones, reveals Elmer’s sordid past and those who have adulated him are more than willing to lead him to Golgotha. The fiery conclusion leaves the audience wondering what, in anything, Elmer truly believes. Arthur Kennedy is also very effective as a worldly newsman who scoffs at Sister Sharon’s spirituality yet seems to be very much in love with her.

In 1960, it was clear that the film was attacking “false prophets” rather than all evangelicals. The film deserved its Oscar, as did Lancaster and Jones. You could also make a case for Simmons and Kennedy receiving the honors. All in all, this is a film with enduring value and strength.