The Curmudgeon first encountered H. G. Wells’s “War of the Worlds” and “The Time Machine” in 1953 and has never been the same since. He was already intrigued about the possibility of time travel because of an almost-forgotten comic strip from the 1940s and early ’50s called “Brick Bradford.” Even though it is probably beyond our capabilities, time travel has become a staple ingredient of modern science fiction books, films and television. 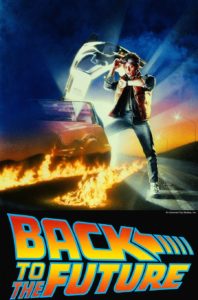 I still remember enjoying the first installment of the “Back to the Future” trilogy in 1985 (just yesterday in curmudgeon years) and eagerly awaiting the final installments. Rewatching the trilogy after nearly a decade made for a delightful weekend, but some tiny flaws are beginning to show. I am particularly curious about a missing generation of “Biffs.” We have the loutish bully of the first episode and his equally loutish grandson in the third, but where is the in-between generation?

The 2015 re-release of the DVD set contains numerous “extras” I found informative, particularly the revelation that Michael J. Fox was filming the second episode at night while taping episodes of his television series during the day. That explains why his performance in the second  film seems slightly detached. I also enjoyed seeing several deleted scenes from the first and third episodes.

One thing the script writers never foresaw is a certain nasty virus that grew into a pandemic. Do we need a new trilogy to show us how to get out of this mess?