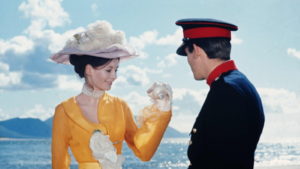 The Curmudgeon has rows and rows of DVDs he hasn’t watched in a decade or so, so the quarantine is a good time to catch up with those. It now seems that he has been guilty for five decades of not appreciating a film, David Lean’s “Ryan’s Daughter.” I remember when it was released in 1970, but I was trying to finish my coursework for my doctorate and the film got away before I could catch it. It was re-released a few years later and I did see it then, but I just didn’t care for it. Seeing it now on a large flat screen makes me realize just how good a film it was and is. (Knowing a lot more about 20th-century Irish history also helps.)

The film is set in western Ireland during World War I when Ireland was still a reluctant part of the United Kingdom; the local inhabitants of a coastal village do not like the British forces stationed in their village and joyously help a German ship unload a cargo of weapons and ammunition. This is not quite as epic as Lean’s previous “Lawrence of Arabia” or “Doctor Zhivago,” but the ingredients are there including  a strong cast and excellent use of landscape.

The cast is excellent; Robert Mitchum plays an aging school teacher who makes an unfortunate decision to marry the spoiled daughter of the local publican. Leo McKern is very good as the publican and Sarah Miles does well as the eponymous daughter. Trevor Howard is very good as a priest and John Mills earned his Oscar for his depiction of a severely retarded fisherman who brings on the final catastrophe.