I certainly saw several noir films in the late 1940s and early ’50s, but I was too young to really enjoy the genre and I did not see some of the classics until they began to appear on television. For some strange reason, I never saw “The Maltese Falcon” until the 1970s, and then only on a small screen. I shudder to think how many times I have seen it during the ensuing decades. 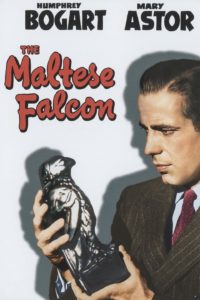 By the time I reached junior high school, I had read the original novel by Dashiell Hammett as well as his “The Thin Man” and “Red Harvest.” I was never fond of the film version of “The Thin Man” and its numerous sequels, but they do resurface frequently on movie channels. John Huston’s 1941 adaptation of “The Maltese Falcon” is still the best adaptation of any of Hammett’s novels.

I am not sure anyone besides Humphrey Bogart could play Sam Spade, the prototype of the hard-boiled detective. His performance is still riveting on the small screen. The supporting cast is equally strong even though the Sydney Greenstreet version of the villain almost became a parody of himself, but Peter Lorre and Elisha Cook provided enough menace to balance Greenstreet. I never cared much for Mary Astor as the femme fatale, but I know I am in a very tiny minority on that point.

Huston actually improved on the original novel with his visuals. The first time I saw the film, I almost gasped out loud when I saw the final seconds. That image is a masterpiece of understatement.