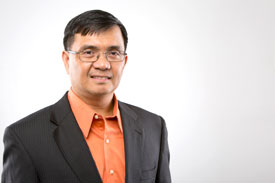 rdo Blado’s paper, “Entanglement and the Generalized Uncertainty Principle,” with HBU undergraduate students Francisco Herrera (2020) and Joshuah Erwin (2016) which was published in 2018 at the peer-reviewed physics journal Physics Essays, was selected to be featured in the “Undergraduate Research Highlights” section in the Spring 2019 edition of the peer-reviewed journal Scholarship and Practice of Undergraduate Research published by the Council on Undergraduate Research. Dr. Blado is a Professor of Physics in the College of Science and Engineering.
The above-mentioned paper is a result of a series of projects completed as part of the research component of the upper-level physics courses at Houston Baptist University. The publication is the first paper in the physics literature to study the effects of the generalized uncertainty principle on the variance form of the uncertainty relation criterion on quantum entanglement. Francisco Herrera is a double-major in physics and mathematics while Joshuah Erwin was a physics major who graduated in 2016. Mr. Erwin is presently a satellite systems engineer at SGT in which he is involved with NASA projects. The two-faculty Physics Department at Houston Baptist University, comprising Dr. James Claycomb and Dr. Gardo Blado, has successfully launched an undergraduate research program that has been an integral part of the physics curriculum. All graduated physics majors and physics minors have participated in research. Almost all graduated physics majors and minors since 2013 have coauthored peer-reviewed journal articles. Undergraduate research has been integrated into the physics curriculum by requiring research for all physics majors and encouraging participation in research by physics minors. Students start a new research problem in their junior year and usually complete the research project by their senior year through presentations at the HBU research symposium or at the American Physical Society sponsored research meetings and through the submission of their work to peer-reviewed physics journals.

The HBU Physics Department takes advantage of the small number of physics majors and minors. Research problems tackled are confined to novel problems on publishable topics. The Physics Department’s requirement of undergraduate research demonstrates the opportunities that small departments can make use of to develop successful undergraduate research programs.