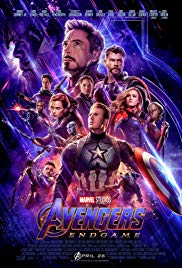 There was never any question that “Avengers: Endgame” would be on my agenda for the April 27 weekend. I had been on tenterhooks since last year when “Avengers: Infinity War” left the world in a quandary as to whether the world would survive the onslaught of Thanos. I am  more than pleased to report that the sequel was well worth the wait. I don’t  know if Marvel can ever top this one; it is the culmination of more than 20 interconnected films.

The film is a bit slow at first as the surviving Avengers regroup and try to plan a counter-strike, but it takes them five years to come up with a plan. Some go down dark paths and others just turn their backs on the problem. The audience roared when “the Big Lebowski” appeared.

There are enough battle scenes to satisfy the most avid “fan-boy.” I can’t say much more for fear of dropping a few spoilers along the way. I can say that there are no Easter eggs scattered through the end credits, but most of the crowd stayed through the entire list of assistant painters.

I can safely say that this was one of the most thoroughly satisfying of all the Marvel films, and, yes, I plan to see it again. Soon.