For what does the Scripture say?, Romans 4:3

For This Reason it Depends on Faith, Romans 4:16

Therefore, Since We Are Justified by Faith, Romans 5:1

But Now You Have Been Freed from Sin, Romans 6:22

If I Speak in the Tongues of Mortals, I Corinthians 13:1-3

There is One Body and One Spirit, Ephesians 4:4-5

For Once You Were Darkness, Ephesians 5:8-14

And Every Tongue Should Confess, Philippians 2:6-11

For Even When We Were With You, II Thessalonians 3:10

This is the Covenant that I will make with the House of Israel, Hebrews 8:10

Now Faith is the Assurance of Things Hoped For, Hebrews 11:1

Donald Jackson includes rich colors and illuminations on almost every page of the book of Revelation, beginning with the detailed book heading and enlarged incipit, that is, the opening words of the manuscript. Jackson intended for the colors in Revelation to harken back to the images in the Prophets volume, thus connecting the visions of the Apostle John with Old Testament prophecy.  The illumination opposite to the Revelation incipit represents the Son of Man and refers back to Daniel’s prophecy about the Son of Man in Prophets. The seven lampstands, which represent the seven churches to which John addressed Revelation, are derived from the Vision of Isaiah illumination in which Isaiah behold God on his throne. Except in this illumination, John is beholding the Son of Man, who stands to the left of the lampstands and is bathed in pure white. Images of fish, like those in Loaves and Fishes in Mark, are also seen in the illumination as well as on other pages of Revelation. A colorful detailing of Revelation 1:13, “‘I am the Alpha and Omega,’ says the Lord God,” is written on the far right margin.

I Am the Alpha and Omega, Revelation 1:8

Letter to the Seven Churches, Revelation 2-3

While Revelation is a letter to seven specific churches in Asia Minor, it is also apocalyptic literature. Jackson balances these two aspects of the letter by depicting the seven churches in this illumination with the colors of a rainbow, as in a surreal vision. The different crosses atop the church roofs show the various cultural backgrounds of the letter’s recipients. The seven lampstands are again incorporated into the image. The golden calf lies thrown down beneath the churches, depicting the rejection of idol worship but also its threat and temptation. To the right is the vision of the slain Lamb that John relates in chapter 5. Bearing the cross and halo that identifies it as the Lamb of God, the Lamb with seven eyes and seven horns stands “as if it had been slaughtered” upon the scroll with seven seals (Revelation 5:6). That which was slain is alone worthy to open the scroll and usher in the end times.

The far right image depicts three crosses with banners and the words of the heavenly choir as described in chapter 4. The choir consists of angels and elders of the church all singing, “Holy, Holy, Holy,” a phrase which is written in Syriac, Greek, and Latin in the illumination. The banners are topped with three different Christian crosses: two versions of the Greek Orthodox cross on the left and middle, and the cross specific to the Benedictines at Saint John’s Abbey on the right. The image is as much an adoration of the Son of Man as it is a rallying cry for the cosmic battle which is about to ensue in the following pages.

The Four Horsemen of the Apocalypse, Revelation 6

When the Lamb breaks open the first four seals of the scroll, the four horsemen of the Apocalypse break loose on the earth: the white horse to conquer, the red horse to kill, the black horse to blight the land with plague, the green horse to bring death. The figures of the horses are shown streaking across the illumination with burning eyes, along with their high-flying banners: the bow, sword, scales, and skull and cross bones. The horsemen’s destruction takes place on human, environmental, and cosmic levels. Wars break out as huge black tanks with the horsemen. Jackson added the shadowy bodies of praying mantis insects to represent plague, since he did not think locusts are scary enough. Disturbing faces and eyes stare out at the reader all over the illumination, and red and blue microscopic images of diseases are seen at the very center. Oil rigs and towers stand scattered in the background, which for Donald Jackson represent damage done to the environment as well as the reason for conflict and war in the Middle East and Africa. Triangular signs warning of radiation are also make up the collage of destruction. Jackson was completing these pages as Japan was struggling with the effects of the earthquake and tsunami on the Fukushima nuclear power plant in March 2011. The events in Japan made clear to Jackson that radiation is a prime example of an evil one cannot escape by hiding in caves or under the earth (Revelation 6:15). A single nuclear tower rises in the upper left corner.

As bodies careen to their deaths in the right margin of the illumination, God’s presence is still shown amidst the horrors. Thin bars of holographic foil are scattered throughout the image. Rather than using gold foil for the bars as was done in earlier volumes, Jackson chose the holographic material, which shows a rainbow of colors as it reflects light. The rainbow effect suits the surreal, yet-to-be nature of the vision.

The elements of this illumination cover four pages of The Saint John’s Bible and displays the narrative in Revelation 12 about the infernal dragon chasing the woman laboring in childbirth. The large image shows the woman with an anxious face gripping her pregnant belly while the dragon writhes at her feet. The woman in this narrative ultimately represents Mary, having given birth to Christ, and the church, whose purpose it is to bear Christ to all nations. The golden stamp of tree branches around her head indicate her crown of stars, and the moon is depicted with holographic foil beneath her feet. The fierce monster in the lower half of the image has many faces, and some of them are human, indicating how evil manifests itself all around and in us and how Satan is the deceiver and father of lies. The striped snake body is a reprise of the illumination in Genesis of the serpent in the garden, who is the devil himself. The golden lance of St. Michael, in the shape of a cross, is impaling one of the monster’s heads. Opposite to the woman and the dragon illumination is a small image by the heading of Revelation 9. The marginal text beneath the image gives context, for, after the woman gave birth, “her child was snatched and taken to God and to his throne” (12:5). Now the Son of Man sits on his throne, an image that is reprised from Daniel 7, which recounts a vision of the Son of Man. The gold cross in the image identifies the Son of Man as Jesus.

The following two pages depict the dragon attempting to snatch his victim, and the woman being spirited away on the wings of an eagle. The snake, on the left half of the illumination, has now descended on earth among the havoc wrecked by the four horsemen. Black praying mantis figures represent the devil’s angels. Yet the woman has gone, and only strips of fabric from her dress on the right page are left behind. The stamps of wings across the top indicate her way of escape. 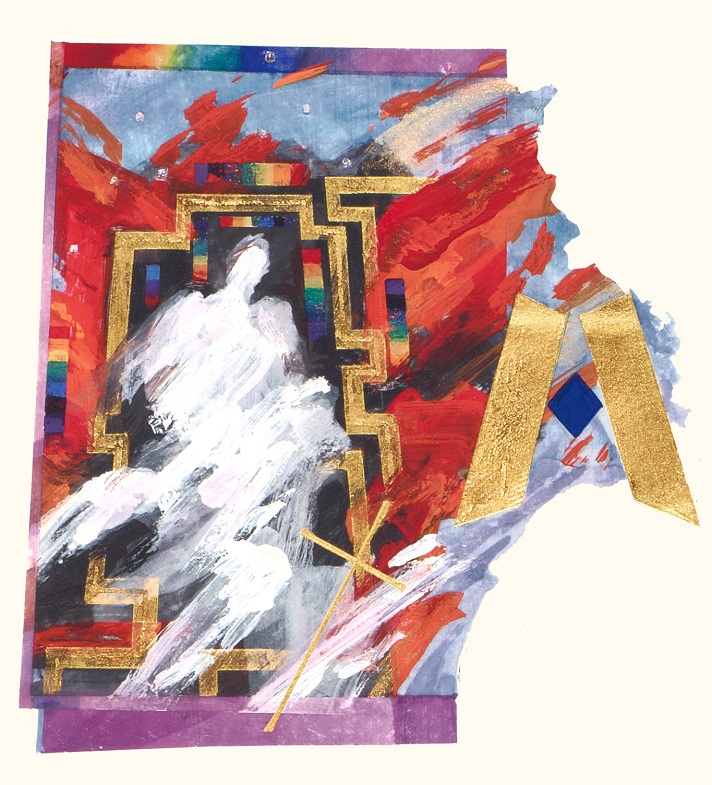 Woman and the Dragon, Revelation 12

Vision of the New Jerusalem, Revelation 21

All of history culminates in the New Jerusalem, coming down from heaven and established on earth.  In the golden city, Jesus sits on the throne, the Lamb that was slain and by whose death redemption comes.  Angels fly freely throughout the city.  The gates, each a large pearl, remain open so that all may enter, from every nation, tribe, people and language.  As in the Garden of Eden, in the New Jerusalem, a river runs through the city and there is a tree of life, which bears gold leaves that will heal the nations.  In the New Jerusalem, the world has been redeemed and restored from its fallenness.

Rather than ending Revelation with the new Jerusalem illumination, Jackson closes the book with a liturgical image. The colors and the treatment of the text in the image reflect the incipit at the beginning of Revelation. The background of the text reprises the colorful back layer in Vision of the New Jerusalem. Angels circle around the solitary cross that represents the salvation and hope Jesus has provided by his sacrifice. A faint gold voiceprint travels across the illumination above the base of the cross. Donald Jackson asked the president of Saint John’s University, Father Robert Koopmann, OSB, to sing a piece with accompaniment to be displayed at the end of Revelation. Father Bob chose and sang a joyous portion of “Adoro te Devote,” a Eucharistic hymn written by Thomas Aquinas. The voiceprint ties in the liturgy and prayer that the church as practiced now for centuries. John concludes Revelation with the promise of Jesus’s return and the life of hopeful waiting we now live until the second coming. Thus, The Saint John’s Bible ends with a great Amen.