“God’s Word is a light that shines in a dark place.” – Martin Luther

In the 16th century, power and wealth had corrupted many of the church leaders. Teachings and practices such as the doctrine of purgatory and the sale of indulgences to shorten time in purgatory, were based on church authority and tradition, not on the Scripture.

Martin Luther (1483-1546), a German Augustinian monk, spoke out against such corruptions.  In 1517, he published Ninety-Five Theses, criticizing the church’s teachings and practices. A key idea of the Reformation was that truth for the Christian was based on the authority of “Scripture alone.”

Martin Luther was placed on trial for his writings against the church.  He told the court, “I am bound by the Scriptures…and my conscience has been taken captive by the Word of God.” Though Martin Luther survived his trial, his friends hid him in the Wartburg Castle to protect him from his enemies. There he translated the Bible into the language of the German people.

With Gutenberg’s invention of printing only decades earlier, it was possible for everyone to have a personal copy of the Bible. Each person could now read and examine the Scripture for himself and was responsible to God for knowing the Bible and living life according to its teachings. In this way, the Reformation planted the seeds of individualism and liberty. 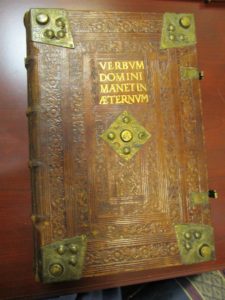 Though there were German translations of the Bible before Martin Luther, Luther was the first to translate from into German from the Greek and Hebrew.  His New Testament translation was first published in September 1522. This beautiful 1524 folio edition was published while Luther was still working on his translation of the Old Testament.  The spectacular cover is stamped in gold with Verbum Domini Manetin Aeternum – “The Word of the Lord Remains Forever.”  The volume includes over 30 woodcut illustrations and an amazingly complete “Concordanz.”

In translating the Scripture, Martin Luther tried to render the Greek and Hebrew originals into common German. Luther’s Bible avoided regional dialects and led to a standardized written German. Luther first published his New Testament in 1522.  The complete Bible was published in 1534. Luther’s translation remains the standard German Bible translation today. The woodcuts in the first edition were done in the workshop of Lucas Cranach and were hand-painted. 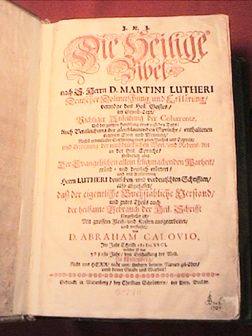 The great musician Johann Sebastian Bach was a devout Lutheran.  Many of Bach’s chorales and sacred oratorios, such as his St. Matthew’s Passion, set Martin Luther’s German Bible translation to music.  His Bible is Martin Luther’s translation.  The commentary (in a smaller font) is comprised mainly of excerpts from the works of Luther (sermons, lectures, etc.) as compiled by Lutheran theologian Abraham Calov.  The volumes are the only positively identified items from the library of Johann Sebastian Bach (1685-1750).  A list of Bach’s library compiled after his death included some 50 titles (about 80 volumes), mostly theological works.

The “Bach Bible” arrived in the United States before 1846, and was purchased by a Lutheran family (the Reichles) from a bookseller in Philadelphia.  The family eventually settled in Michigan.  The family used to read the Bible without realizing who had formerly owned it!  In the mid-1930s, a Lutheran pastor visiting the family in Frankenmuth noticed Bach’s signature on the title page, leading to the establishment of Bach’s ownership of the volumes.  The Reichles later donated the volumes to Concordia Seminary Library in St. Louis.

Bach’s signature, monogram, and the year 1733 are inscribed on the title pages of each of the three volumes.  Scientific analysis of the ink and handwriting has identified 348 markings, underlinings, and marginal notes in the Bible by Bach’s own hand.  These were all made for Bach’s private use, without thought that anyone else would be reading them. They offer a glimpse into Bach’s soul and spiritual life.  Lecture by Dr. Thomas Rossin:  J.S. Bach: His Bible and His Music

NEXT: The English Bible