Bibles for a Young Republic 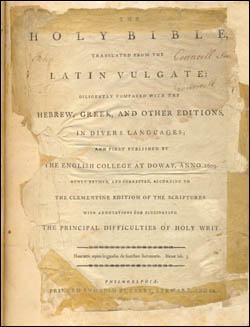 This is the first American edition of the Douay translation of the Vulgate Bible. The Vulgate was the 4th century Latin translation of the Bible made by St. Jerome and used throughout the Middle Ages. The Roman Catholic Church preferred the Vulgate and later vernacular translations were made from it. The Douay translation of the Vulgate was made at the English College in Douai, France. The New Testament was first published in 1582; the Old Testament in 1609. The Douay Bible is to the English-speaking Catholics what the King James Bible is to the Protestants. Carey originally advertised this Bible would appear in 48 weekly numbers. Subscribers would have the Bible personally bound once all issues were collected. Most of Carey’s Bibles were the King James Version.  His quarto Bibles included many additional study helps for the reader. These additions to the Bible in part reveal Carey’s marketing talent.

Isaiah Thomas was one of the notable publishers of the Bible during the early days of the Republic. He began his publishing venture in Boston, together with Zechariah Fowle, in 1770. He also published the newspaper Massachusetts Spy, in which he supported the colonial cause. During the Revolutionary War, he moved his presses and types to Worcester, Massachusetts, where he built up a large business.  He set up a “standing edition” of an entire Bible, which could be reprinted without resetting the type, making the printing of Bibles more profitable. 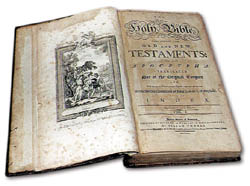 This 1791 Bible was printed in two folio volumes. It contains fifty engravings. The engraving between the Old and New Testaments shows the First Adam contemplating the ruin of Death, while Jesus, the Second Adam, is bruising the serpent’s head and treading on death.
Engravings from Thomas’ 1791 Folio Bible 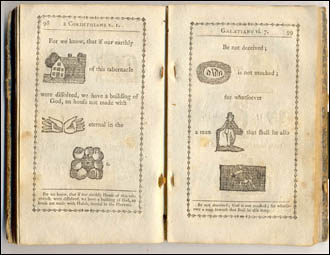 Hieroglyphic Bible for Children 1794
This is the first American edition of a work first published in England and recommended by Rowland Hill, a founder of the London Missionary Society and author of numerous hymns and children’s works. Hieroglyphic Bibles used pictures to encourage children to “read” the Scriptures. Each page contained a separate Bible verse. In his forward, Rev. Hill wrote, “I fear we are not sufficiently attentive to the good of the rising generation. I hope your effort will excite a spirit of diligence in the minds of many, to attend upon the solemn and important duty of bringing up children in the nurture and admonition of the Lord.”  (A later 1836 Hieroglyphic Bible has been reprinted and available for purchase from the Dunham Bible Museum) 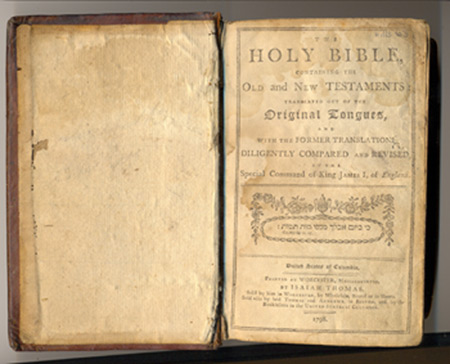 Columbian Bible, 1798
Thomas was part of a small group who believed the name of his new country should be the “United States of Columbia.” He printed a number of Bibles giving this as the place of publication. In 1797, Thomas published his first “Standing Edition,” of which the Columbian Bible is an example. He had ordered an extra set of type so that he could keep the types for the Bible undisturbed or “standing” and ready for the press.
In 1800, Isaiah Thomas’ son, Isaiah Thomas, Jr.,  also published the first Greek New Testament in America.  In the colonial period and the early days of the American Republic, the educated received a classical education which heavily emphasized Latin and Greek. Many continued to have their daily devotions in the Greek New Testament later in life.

Bibles associate with leaders of the early Republic

NEXT: Bibles for a Growing Nation