Bibles for a Growing Nation

During the first part of the nineteenth century, a growing number of commentaries as well as specialized Bible translations were printed in America.  Bible Societies were established, and new printing techniques made the Bible readily accessible to all.

The Bible was at the center of much of the nation’s education and culture, as well as its religious life.   An example can be seen in the campaign poster during Abraham Lincoln’s first campaign for President, in 1860, showing the U.S. Laws and the Holy Bible as the two foundations of the American Republic. (Library of Congress LC-USZ62-3980)

During the nineteenth century, one of the most published Bible commentaries was that by Thomas Scott.  Thomas Scott was an English clergyman who succeeded John Newton (author of “Amazing Grace”) in the Olney Parish when Newton moved to London. Scott had been a Unitarian but came to accept Jesus 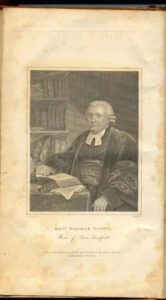 as Redeemer and Lord largely through Newton’s influence. Scott wrote of his conversion in The Force of Truth, a testimony of God’s grace still in print today. Scott’s 6-volume Commentary on the Bible, first published in America in 1804, was extremely popular and went through numerous American editions in the 19th century. The Dunham Bible Museum has 5 copies of Scott’s commentaries, published between 1804 and 1845. Scott’s “Preface” to his commentaries, printed below, was often reprinted in Bibles, without the commentaries. R. A. Torrey heavily relied on Scott’s Commentaries when writing his Treasury of Scriptural Knowledge. 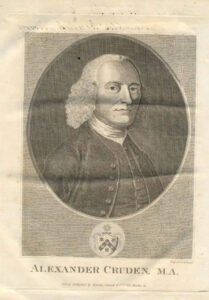 erican edition of Cruden’s famous work, which has had a world-wide use and is still in print.  Alexander Cruden (1701-1770) first completed his famous Bible concordance in 1737.  It was to be a “Dictionary and Alphabetical Index to the Bible; 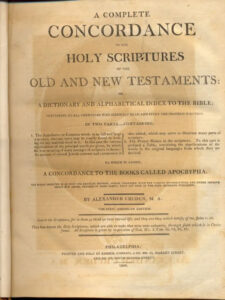 Very Useful to all Christians who seriously read and study the Inspired Writings.”  Though an extremely learned gentleman, Cruden had bouts with insanity, which first began when he was disappointed in love, shortly after receiving his master of arts degree.  At times he was confined in an asylum; at other times he functioned in society in spite of his eccentricities, which were usually humorous rather than harmful.

Cruden adopted the title of “Alexander the Corrector” and assumed the office of correcting the morals of the nations.  He carried about a sponge with which he could remove all inscriptions of graffiti he thought contrary to good morals. 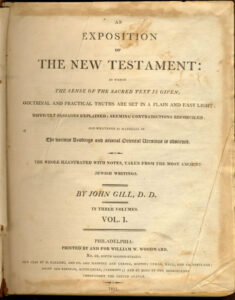 John Gill (1697-1771) was a Baptist pastor in England noted for his learning.  He was fluent in Latin and Greek and taught himself Hebrew.  Since the Bible s written by Jews, he realized the writers, though inspired, would have used many Hebrew idioms and allude to rites and ceremonies peculiar to their time.  His New Testament exposition was thus “Illustrated with Notes taken from the most Ancient Jewish Writings.”  Gill’s expositions are still profitably studied; they are still in print and can be read on several Internet sites. 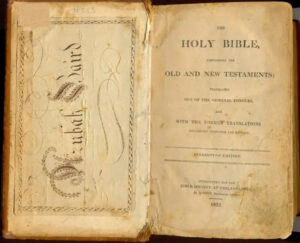 “This is the first stereotyped Bible to be printed in the Unite States,  The plates were imported from England by the Philadelphia Bible S 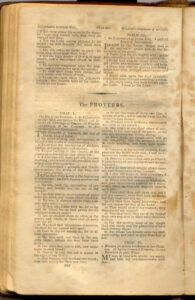 ociety.  The British and Foreign Bible Society donated 500 pounds toward the cost and the United states government admitted the plates free of duty.  They were received in October of 1812 and immediately turned over to the printer, William Fry of Philadelphia.” (M. Hill.  The English Bible in America).  At a time when the United states and Britain were at war and all trade between the countries had been cut off, the Christians of both countries cooperated to spread the Scriptures.  The U.S. government permitted the free receipt of the British Bible plates, in spite of an official embargo on all British imports.

Stereotype printing greatly increased the availability of Bibles.  Printing was no longer done from moveable type, but the type was used to create a mold from which a copy was formed, and the printing was done off the copy.  This meant that later printings did not require the resetting of type.    Byrd Collection 85 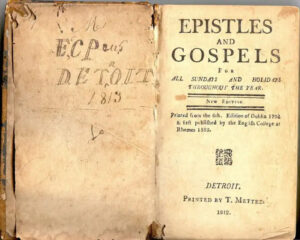 The American Bible Society, one of the first religious non-profit organizations in the United States, was founded in 1816.  It was an outgrowth of the Second Great Awakening, the spiritual revival that transformed much of American society in the first half of the nineteenth century.  Many notable Americans were part of the Society’s early years, including Francis Scott Key, Benjamin Rush, and John Q. Adams.  Elias Boudinot, who had been baptized by evangelist George Whitefield and had been President of the Continental Congress and Director of the U.S. Mint, was the Society’s first President.  With all of his important positions in government, Boudinot believed the presidency of the American Bible Society was the “greatest honor conferred on me this side of the grave.” The Society’s second President was John Jay, the first Chief Justice  of the Supreme Court. 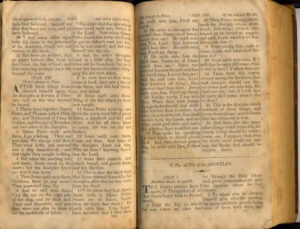 The Society’s goal was to insure there was a Bible in every American home and to spread the Scriptures throughout the world.  The Society issued Bibles translated into the various American Indian languages as well as helped finance William Carey’s translation work in India.  It published the first Bibles for the visually impaired, and when the U.S. went to war with Mexico in the 1840’s. the ABS supplied over 7000 Bibles for the soldiers.  During the Civil War the Society supplied Bibles for both North and South.  7,420,910 Bibles were distributed to soldiers during World Wars I and II, and with the collapse of the Soviet Empire, the ABS  made a commitment of $23.5 million to provide Bibles to the former communist countries.   Of the various ABS Bibles in the Dunham Bible Museum’s collection, shown here is one from 1824 with larger type for those “whose sight has become impaired. 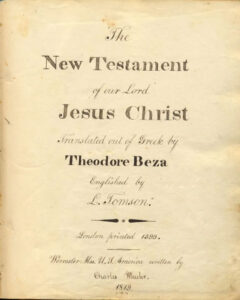 This beautifully written manuscript of the New Testament was prepared by Charles Wheeler, a bookseller in Worcester, Massachusetts.  Wheeler’s manuscript is a a transcription of the translation of Theodore Beza’s Greek New Testament “Englished” by Laurence Tomson.  Beza was John Calvin’s successor 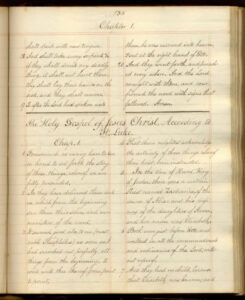 in Geneva. and Tomson’s translation of Beza’s work was the New Testament of the Geneva Bible (1560).  Why Wheeler made the manuscript is unknown. 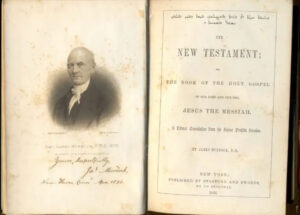 James Murdock (1776-1856) studied theology under Timothy Dwight at Yale and went on to become a minsiter, seminary professor, and author on church history, oriental languages, and philosophy.  He was one of the founders of the American Oriental Society.     Byrd Collection 373 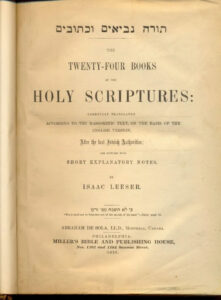 Isaac Leeser played a formative role in American Judaism.  Leeser wanted to strengthen the Jewish community in its traditions so it would not be assimilated by Protestant America.  Many Jews of that day did not read Hebrew and were reading the King James Bible.  Leeser believed Jews should have their own translation of the Scriptures, free from Christian interpretation.  He spent fifteen years, in the midst of many other projects, preparing his Bible translation “after the best Jewish authorities.” Bertram Korn summarized Leeser’s accomplishments for American Judaism: “Practically every form of Jewish activity which supports American Jewish life today was either established or envisaged by this one man.  Almost every kind of publication which is essential to Jewish survival was written, translated, or fostered by him.”  Byrd Collection 383 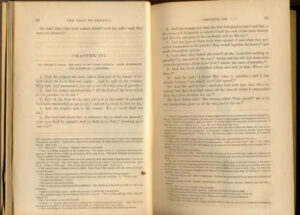 Francis Kenrick, bishop of Philadelphia and later archbishop of Baltimore, published his revision of the Douay version in six volumes between 1849 and 1862.  As Bishop of Philadelphia, Kenrick became involved in the uprisings surrounding the “Bible law” in the 1840’s.  This law required Pennsylvania public schools to provide for the moral training of the students by having Bible lessons from the King James Bible.  Bishop Kenrick wrote a letter to Philadelphia’s school board requesting that Catholic students be allowed to use their own Bibles and be excused from protestant devotional lessons.  Descendants of the early settlers believed that the numerous Catholic immigrants were threatening the social, economic, political, and religious institutions of the United States.  The Catholics thought the Protestants were trying to Americanize their children and change their religion so they would become disconnected from their immigrant origins.  It was the “Culture Wars” of the 1840’s and sometimes sparked violence in the cities.  Byrd Collection 401 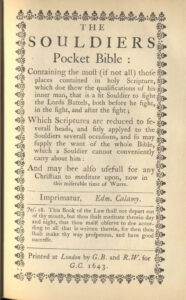 Bibles for the Soldiers

The Souldiers Pocket Bible was issued at the very beginning of the American Civil War.  It is an exact reproduction of one issued in 1643 during the English Civil War.  The quote on the title page, “Trust in the Lord and keep your powder dry,” was Oliver Cromwell’s famous battle cry to his troops.

The Metal covered Bible was used during World War II.  There have been numerous stories of a pocket Bible stopping or slowing a bullet and preser 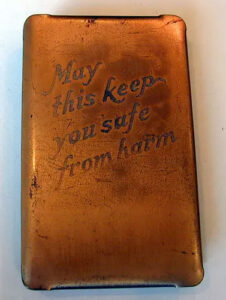 First Bible Translated by a Woman, 1876 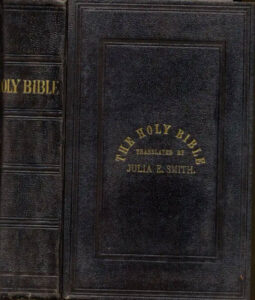 The first Bible translated by a woman was begun in 1843.  Julia Evelina Smith studied the Bible in the original Greek to determine the authority for William Miller’s prediction of the end of the world.  She concluded that the King James translation was not literal enough.  She taught herself Hebrew and translated both Old and New testaments word for word. She published the Bible at her own expense in time for the country’s centennial. Because of its awkward English, the Bible never sold well, but scholars did recognize the accuracy of Smith’s literal translation.  After reading her Bible, Amos Andrew Parker sought her acquaintance and married her in 1879.  They were both 87.  Julia died at the age of 94; her husband lived to be 109.  Byrd Collection 432

Revised Version of the New Testament, 1881 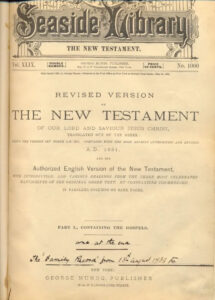 When the King James translators did their work, the earliest Greek manuscript available for their use was from the tenth century, a millennium after the original Hebrew and Greek books of the Bible had been written.  In the hand copying of the manuscripts over the centuries, slight variations had entered into the texts.  Beginning in the early nineteenth century, archaeologists and Bible scholars discovered numerous Bible manuscripts written earlier, many in the second through fourth centuries, much closer to the date of their original writing.  One of those manuscripts, Codex Sinaticus, now in the British Museum, was discovered in 1844 by Constantine Tischendorf, while visiting a monastery in Egypt.  Copied in the middle of the 4th century, this was the earliest complete copy of the New Testament known.  With the many older manuscripts available, Biblical scholars in both England and America worked to revise the King James Bible, to increase its faithfulness to the original Hebrew and Greek.  The first revised American edition of the New Testament was issued in 1881, with Constantine Tischendorf providing an introduction.  Byrd Collection 437