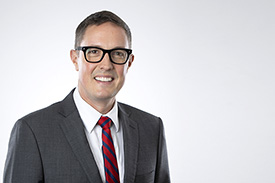 Dr. Tallon is a member of the Honors College faculty and Chair of the Apologetics Department. Both areas of service allow him to explore the intersection of theology, philosophy, and the arts: helping students to understand the Lordship of Jesus over “every square inch” of creation.

Dr. Tallon’s primary areas of research are in Christian theology and theological aesthetics. He is especially interested in doing ‘theology through the arts,’ which examines how the arts can reorient and enrich our understanding of Christian truth.

In addition, Dr. Tallon is a contributor to the Transpositions blog, maintained by the Institute for Theology, Imagination, and the Arts (transpositions.co.uk), and to Seedbed (seedbed.com).

Dr. Tallon is a member of the Evangelical Philosophical Society and the Wesleyan Theological Society.

Involvement in ministry is important to Dr. Tallon, and he has held a number of full-time positions in youth and college ministry.

He has a large family, who keep him on his toes. He likes outdoorsy sporting activities that don’t involve the application of game theory (e.g. biking, hiking, camping, running, frisbee, etc.).