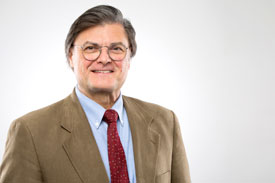 Mr. Collins’ teaching focus is on introducing college students to the field of art and to social and creative thinking within a Christian context. In addition, he is dedicated to the further advancement of HBU art majors and to advanced graduate study in studio art. Currently as Artist in Residence for Painting his teaching load is primarily centered with the MFA graduate student population.

As prior lead professor of art-painting at the School of Art Texas Tech University and Sam Houston State University from 2002-2006, Mr. Collins has taught Beginning Painting in oil, Water-media, Experimental Undergraduate and Graduate level painting, Graduate painting, Graduate Dissertation and Graduate Seminar. Collins has also conducted four study abroad courses in Italy since 2003 and several summers in Hilmsen, Germany for both Graduate and Undergraduate students.

As a professional artist, LewAllen Galleries exclusively represents his art in Santa Fe, N.M, Norwood Flynn Gallery in Dallas, Texas, Virginia Miller Galleries in Coral Gables Miami, Florida and both Redbud and GGallery in Houston Texas. In addition his works are also represented abroad in La Galerie K in Paris, France and Zietkunst Galerie in Halle, Germany. He maintains a very active exhibition schedule, showing extensively both regionally, nationally, and internationally. Mr. Collins, paintings are represented in permanent collections of over sixteen museums including the Museum of Fine Arts Houston, The Ogden Museum of Art of the American South, New Orleans Louisiana El Paso Museum of Fine Art, Art Museum Of South Texas, San Antonio Museum of Art, Texas A&M University Wayne Stark Museum, College Station, Texas, and both the Lowe and Bass Museum Collections in Miami Florida. His works have been juried in over 250 peer reviewed local, national and international art exhibitions and he has had 51 solo exhibitions at galleries and museums in the United States, and been selected for major international exhibitions in Germany, Cuba, China, France, Greece, Turkey and Peru.

In 2009, a hardbound publication of “From Ruins to Resurrection: Sacred Landscapes of Michael Roque Collins” in review of his creative efforts was published by Halycon Press, Houston Texas. This first major publication dedicated solely to his art and contains three major writings on his works from 1991-2009. Essays included in the publication came from a variety of sources, though Mr. Ken Marvel, owner of LewAllen Galleries in Santa Fe, N.M., provided the introduction, Mr. Jim Edwards, former Menil Museum, curator of the Pop Exhibition wrote the main essay and a secondary essay was included by internationally renowned Art critic, Mr. Edward Lucie-Smith, who has authored over 100 canonical texts over the past forty years.

Mr. Collins has been awarded over thirty awards in regional and national competitions including three Houston Cultural Arts Council Grants for excellence in painting. He has also won a prestigious MAAA-NEA grant award for excellence in painting and works on paper.  His painting was also awarded recently in the UNESCO Bio Ethics art competition which, featured artists from 23 countries where Collins was one of eleven top prize winners. His professional activities include a huge number of lectures around the world and he has been a visiting artist and guest lecturer at Baylor, SHSU, TCU, SMU, TTU, UTPB, and University of Miami to name only a few. Mr. Collins has also been the main lecturer at the Taste of Jung at the Jung Educational Center in Houston TX and the annual Tower Series lectures for Art and Medicine at St. Luke’s Medical Center. He was also the Artist-In-Residence at the Children’s Art Card project and has over 1000 hours of volunteer service as Artist-in-Residency at MD Anderson Hospital serving children with cancer from 1990-1998. He has also juried numerous art exhibitions in the Houston area. In addition to this past community service he has recently been involved in organizing an HBU Art presence at Yellowstone Academy, Houston Texas. His recent on campus activities include the organization and creation of our new on campus Fine Arts Museum and the planning of its outreach activities into less fortunate communities.