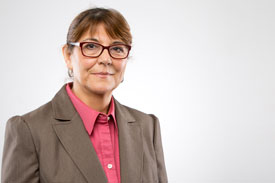 Dr. Bermejo’s teaching focus is on helping students acquire proficiency in Spanish and an understanding of the Spanish Culture. Her areas of interest include Spanish Linguistics. Spanish Second Language Acquisition and Spanish Heritage Language Acquisition. Language for Specific Purposes. She leads annual language and cultural study abroad trips to Spain

In addition, Dr. Bermejo has collaborated as a consultant in the edition of several textbooks in Spanish (Cengage).

Dr. Bermejo, has served on dozens of committees. She has served as the Faculty Assembly President and the Faculty Sponsor for HBU Sigma Lambda Gamma, a national sorority society. Dr. Bermejo also assists with TRIO, GEN 1 and LSSI. She is the founder Spain Study Abroad Program and serves as the program coordinator. She is also the designer and Coordinator of Spanish Placement for Spanish as a Second Language and Co-designer and Coordinator of Spanish as a Heritage Language Exam. She currently serves as the coordinator for the Heritage Speaker Exam.