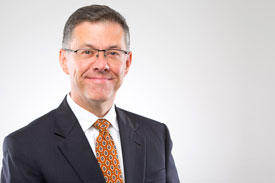 His award-winning teaching engages students in a conversation that relates classical concepts and theories to current events and modern politics.

Dr. Christopher Hammons is the Director of the Center for Law and Liberty and a professor of Government at Houston Baptist University. He teaches courses in constitutional history, political philosophy, and presidential politics.

Dr. Hammons received a B.A. in Government and History at the University of Texas at Austin in 1991 and an M.A. and Ph.D. in Political Science at the University of Houston in 1997. He has published works in a variety of places including the American Political Science Review, the Albany Law Review, The Journal of Law & Public Policy, Education Next, the Houston Business Journal, and the Houston Chronicle. He is currently writing a book entitled America’s Constitutional Culture, and his previous book Constitutionalism of the American States was nominated by the American Political Science Association for best book in history and politics.

Dr. Hammons is the recipient of several teaching awards and is a strong advocate of a classic liberal arts education, using primary texts in history, philosophy, and politics to teach about contemporary social and political issues. He is a sought after speaker on the American Founding, and has given several presentation in the Houston area on George Washington, the Constitutional Convention, and the American Founding.

Dr. Hammons lives in Sugar Land, Texas with his wife and two children.