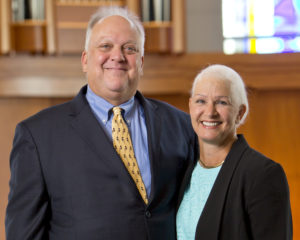 Named the HBU Family of the Year in 2013, John and Elizabeth Gibson have demonstrated in countless ways how a family can impact a university. John and Elizabeth were introduced to Houston Baptist University when their son, John, enrolled as a piano performance major. They have been loyal supporters of the University and various projects ever since.

John, a member of the Board of Trustees, currently chairs the Finance Committee and will assume the role of Chairman of the Board, effective November 15, 2016. In 2013, he delivered the Prince Chavanne lecture in Christian Business Ethics on the topic of changing culture. John most recently served as the President and CEO of Tervita Corporation.

Together, John and Elizabeth have been involved in supporting numerous events, including the President’s Leadership Council, Friends of the Arts, the Center for Christianity in Business, and A particular highlight for the University was the School of Music’s joint production of Credo with the Houston Symphony Orchestra, for which the Gibsons were key supporters. They have also shown their support by giving generously to scholarship funds and the Center for Evangelism. To magnify the University’s impact for the cause of Christ in the world, the Gibsons established the Elizabeth and John Gibson Endowed Chair in Apologetics in 2012. 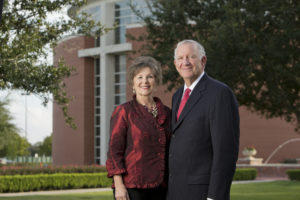 Dr. Robert and Sue Sloan have been serving Houston Baptist University as President and First Lady since September 1, 2006. Their influence is seen in countless ways. Under Dr. Sloan’s visionary leadership, HBU is experiencing unprecedented growth and established its twelve-year vision plan, The Ten Pillars: Faith and Reason in a Great City, through which the University will fulfill its faithfulness to its historic Christian mission. Initiatives that have been implemented to accomplish the goals outlined in the Ten Pillars include the University’s first doctoral program, an EdD in Executive Educational Leadership, which moves HBU to the next level as a comprehensive Christian institution. Additionally, a number of new graduate degree programs have been added, including the Master of Apologetics, Christian Leadership, Divinity, Philosophy, and Fine Arts. New undergraduate initiatives include the launch of an Honors College and exciting new programs such as an online RN to BSN program, Cinema and New Media Arts, Multimedia Arts, Great Texts, and Classics. In Athletics, the Huskies returned to full membership status in Division I of the NCAA, joined the Southland Conference, and added football and sand volleyball to its varsity offerings. The creation of HBU’s seminary, Houston Theological Society, was announced in the summer of 2016. In conjunction with Second Baptist Church, classes began in the fall on and off the HBU campus.

During the past ten years, the University has expanded its campus facilities to include the Hodo Residence College, the University Academic Center, Husky Stadium, Belin Tower, and The Pillars at HBU – a redevelopment of University properties at US 59 and Fondren. In addition, the University received its largest gift in the school’s history through the generosity of Archie and Linda Dunham, and is one of six universities in the country to serve as a site for a McNair Center for Entrepreneurship.

In all ways, the Sloans have served as salt and light to the world through their lifelong dedication to Christian higher education. They have demonstrated their passion for His word through their involvement in the city of Houston and beyond, and their love for students, faculty, staff, and alumni through their hospitality. The Guild of HBU has recognized the leadership of the Sloans through the creation of the Robert B. Sloan Endowed Scholarship and the Sue Collier Sloan Endowed Scholarship. The HBU Alumni Association also honored the Sloans with the Alumni Hallmark Award for their exemplary leadership. Through the expansion of HBU’s influence and God-given mission, Sue and Robert Sloan have touched many lives during their ten years. 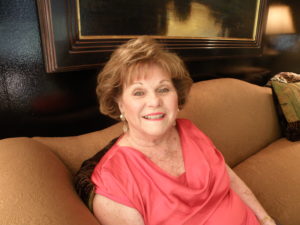 Mary Ann Belin’s involvement with HBU began in the early days of the University. With her late husband, Dr. Bruce Belin, Jr., Mary Ann was crucial to the growth of the University. Together, they created the Mary Ann Belin Endowed Academic Scholarship, which has assisted students financially since 1981. Additionally, many important landmarks on campus, like the Hinton Center, are erect now due to the hard work of the Belins. Located in the Joella and Stewart Morris Cultural Arts Center, Belin Chapel was named for Bruce and Mary Ann through a generous gift by the Cullen Trust for Higher Education. The Mary Ann Belin School of Nursing and Allied Health Simulation Lab was built in honor of Mary Ann to represent her servant’s heart. They were both honored with the Hallmark Alumni Award in 2012. Mary Ann honored Bruce’s legacy and memory through the University’s newest landmark, Belin Tower. Located at the campus entrance off the Highway 59 feeder road, Belin Tower is a visual representation of the Belins’ dedication to Christian higher education and serves as a welcoming monument for visitors to our campus.

Mary Ann has also been a longtime member of The Guild, serving as president of the organization from 1999-2000 and through her involvement, there have been many endeavors supporting the mission of the University. The Guild named her as the 2013 Silver Tea Honoree to recognize her many efforts. Currently, she serves as an Advisory Trustee on HBU’s Board of Trustees, and she continues to participate in numerous campus organizations, including the American Museum Society. 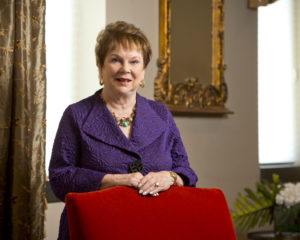 Linda Higginbotham’s servant spirit has blessed HBU in countless ways. Introduced to The Guild at a Christmas Luncheon, she quickly became a member. During her longtime involvement with The Guild, Linda has served the organization in almost every leadership role available. As a former teacher herself, Linda’s dedication to raising funds for graduate scholarships in the College of Education and Behavioral Sciences has blessed the lives of many other teachers. Her passion has grown to include theology students in the School of Christian Thought, who are now also recipients of The Guild scholarships. Her critical leadership in The Guild’s Silver Teas and the scholarship program demonstrates her true commitment to the success of graduate education at HBU. In order to pay tribute to her leadership over the years, The Guild named her as the 2012 Silver Tea Honoree. An active member of the American Museum Society, Linda also served as president of the organization.

Presented with the Milton Cross Outstanding Volunteer Award at the 2003 Spirit of Excellence Gala, Linda is also dedicated to HBU’s nursing program. She and her husband, Earle, have championed many endeavors to support the School of Nursing and Allied Health and other University initiatives, including the President’s Leadership Council. 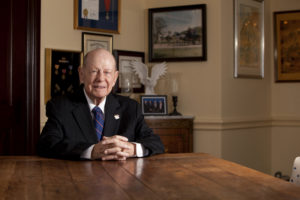 As one of the twenty-five original founders of Houston Baptist University, Dr. Stewart Morris has been a champion of the University for more than fifty-five years. A founding trustee member, Dr. Morris has served as the chairman of the HBU Board of Trustees multiple times, and currently holds the position of an Advisory Trustee. His enthusiasm for the success of the University means that he can often be found visiting with students, faculty, and staff on campus.

Numerous landmarks across the HBU campus proclaim the Morris name. In 1969, Stewart and his late wife, Joella, donated ten granite pillars from the 1899 Galveston County Court House to the University. A tribute to the Ten Commandments and the inspiration for HBU’s current vision plan, The Ten Pillars: Faith and Reason in a Great City, these columns are a physical reminder of the strong foundation that Dr. Morris built for the University. The Morrises also contributed significantly to the Joella and Stewart Morris Cultural Arts Center, which was dedicated in October 2007. A prominent feature inside the Morris Cultural Arts Center, the Museum of Southern History, is also due to the work of the Morris family. In a recent addition to campus, Husky Stadium, football fans can sit in the Morris Section to cheer on the Huskies.

A past recipient of the Spirit of Excellence Award, Alumni Hallmark Award, and Family of the Year, Dr. Morris continues to sustain his lifelong commitment to the University. The Stewart Morris Endowed Academic Scholarship has blessed numerous students over the years. Most recently, he created a scholarship program for students attending HBU from Wharton County. Dr. Morris has been instrumental in establishing and supporting the Christian foundation of Houston Baptist University, as much today as when it was founded in 1960.