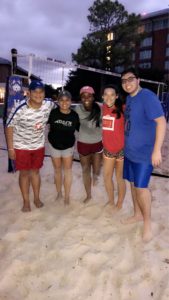 To put it simply, Houston Baptist University has changed my life. From the life-long friends who are always there for me when I need them, to the supportive faculty who care about their students’ goals to succeed, there is not one person at HBU that hasn’t impacted me and pushed me towards being the best person I can possibly be.

When arriving at HBU for the first time, I was not sure I had made the right decision about whether or not this was where I wanted to spend the next four years of my life. That changed as soon as I was walking down the brick Heritage Walkway through Holcombe Mall and I felt this feeling of “This is where you belong” and I knew then that I was where I was supposed to be.  Ever since that moment, HBU has not ceased to amaze me and has constantly been solidifying that I had made the right choice.

One of those “right choices” was choosing to accept Jesus Christ. Coming into HBU, I was not a believer, and I didn’t know if there was a God. But that changed once I attended the HBU Odyssey Summer Camp. Out in the wilderness that is Rock Springs, Texas, I finally allowed myself to open up to God after being introduced to who He really was, and not the misconstrued image that had been etched into my brain, and sure enough, I knew that He was there, waiting for me to make the best decision of my life. Since that moment, I dedicated my life to God and being his servant at HBU.

Now, in my second year as a Biochemistry and Molecular Biology major, I am more involved than I ever thought I would be! I have been awarded the privilege of being a Commuter Assistant, a TRIO SSS Ambassador and Peer Coach, Baptist Student Ministries Small Group Leader, and a Co-Chairman of the AED Publicity Committee. These positions have taught me about diligence, intentionality, and what it means to be a true servant leader.

One of the most amazing opportunities I have had the privilege of receiving while being at HBU was giving my own TED Talk! I never in a billion years would’ve thought I had anything to say that was worthy of such a prestigious stage as TED, but I guess God thought otherwise. In short, due to my own experiences with my mom, as well as doing a lot if research, I talked about the critical necessity of family and friends being the social support for breast cancer patients, and how that support helps fight breast cancer. 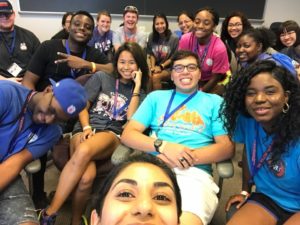 Had God not been working in every second of my life, I wouldn’t have a TED Talk, I wouldn’t be the leader I am today, I wouldn’t be at HBU, and I am not even sure I would be a believer. But God being the amazing being He is, everything has played out according to His plan, and to Him I give thanks. It is also to HBU that I give thanks for the opportunity to be introduced to the best thing in my life. Thank you, and Hail the Orange and Blue.