A Center for Christianity in Business Networking Event

The HBU Archie W. Dunham College of Business and the Center for Christianity in Business invite all business professionals to our next CCB Networking Luncheon. 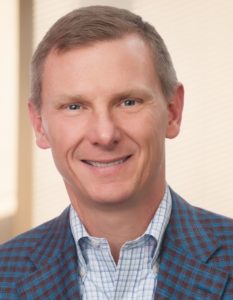 Kevin Garland is the CEO of Mountaire Fams, a role he assumed in 2018 after having served on the Board of Directors for over 10 years. Mountaire is one of the largest poultry companies in the U.S. with nearly 10,000 employees and $2 billion in revenue. Mountaire has been in Sherrill’s (Kevin’s wife) family for over 100 years. Kevin has spent the entirety of his career building, leading and advising industrial businesses. Prior to Mountaire, Kevin was a Partner at The Sterling Group, a middle market private equity firm in Houston, for 17 years.

At Sterling, Kevin led the firm’s investments in DexKo Global, Roofing Supply Group, Hudson Products, Hydrochem, Express Integrated Systems, and Evergreen North American. Together with his partners, Kevin grew Sterling into a top performing private equity firm with over $2 billion in assets under management. Previously, Kevin was at Enron in the mergers and acquisitions group and led Enron’s private equity business. He also spent time at Parker and Parsley Petroleum and Stephens Inc.

Kevin received a B.A. from Rhodes College and an M.B.A. with honors from the Owen School of Management at Vanderbilt University. Professionally, Kevin is passionate about continuous improvement, and developing and motivating winning teams to achieve success through “doing the right thing the right way.”

Kevin has been married to Sherrill, his high-school sweetheart, since 1990. They have three children, Mary Elizabeth, Charlie and Cameron. They are committed to supporting faith-based organizations that help underprivileged children and the poor in Houston, surrounding communities and around the world. Kevin serves as a Trustee of River Pointe Church, and on the Boards of Rhodes College and WorkFaith Ministries.

Mountaire Farms (www.mountaire.com) is one of the largest chicken producers in the U.S., serving markets from Arizona to Asia, Tampa to Tokyo. With nearly 10,000 employees and over $2 billion in revenue, Mountaire provides the world with over 2 billion meals per year. The company has been family owned since its founding in 1914 and is in its fourth generation of family leadership.

The Mountaire’s Creed is:
• To provide quality and service consistently
• To be honest and faith with everyone, including customers, suppliers, community neighbors and each other
• To provide an environment dedicated to personal and corporate growth
• To be good stewards of all the assets God has entrusted to us.