Ten TriBeta chapters from across Texas, Oklahoma, and Arkansas attended the convention held April 1 – 3 at the Mt. Lebanon Camp in Cedar Hill, Texas. This was the first Beta Beta Beta Regional Convention held in person since 2019, when the HBU chapter served as co-host, due to the COVID pandemic.

As host chapter, HBU chapter members were responsible for oversight of the convention, including organizing events, working the registration and check out process, providing gifts to the registrants, moderating oral presentation sessions, and other convention activities.  Nearly 80 undergraduate students and faculty, attended the convention, with 33 students presenting their research.

Beta Beta Beta (TriBeta) is an honor society for students, particularly undergraduates, dedicated to improving the understanding and appreciation of biological study and extending the boundaries of human knowledge through scientific research. 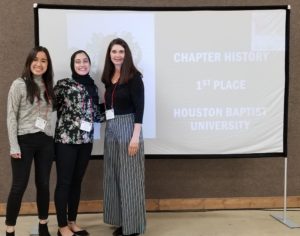