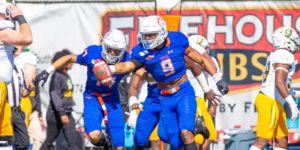 HBU linebacker Caleb Johnson signed a contract with the Chicago Bears as an undrafted free agent shortly following the conclusion of the 2021 NFL Draft Saturday, May 2.

Johnson is the first player in HBU history to sign a contract with an NFL team.

The San Diego native was named the Southland Conference Co-Defensive Player of the Year for the fall season. Johnson recorded 49 tackles, leading the league and ranking fourth in the nation with 12.2 tackles per game. Johnson posted double-digit tackles in every game with 12 against North Texas, 13 against Texas Tech, 11 against Louisiana Tech and 13 against Eastern Kentucky. He was also the most outstanding leader, both on the field and off, as he was named one of the four captains and earned the Garrett Dolan Leadership Award for a second time.

He finished his collegiate career ranked third all-time at HBU with 278 tackles, second with 10.0 sacks and is the Huskies’ all-time leader with seven fumble recoveries.