The Curmudgeon, in his formative years, was culturally deprived because his parents did not consider films directed by Alfred Hitchcock fit his tender sensibilities. The first Hitchcock work he ever saw was the CBS show, “Alfred Hitchcock Presents.” No wonder the Curmudgeon-to-Be acquired the notion that murder was screamingly funny. The first Hitchcock theatrical film he ever saw was that tender opus “Psycho.” At this point, he is heroically resisting temptation to shower readers with appropriate puns and other slashing humor. 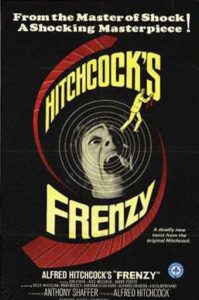 There are still major films from the 1940s the Curmudgeon has not seen in their entirety; he may try to catch up on those during the next pandemic that roils the waters, but today he is dealing with a late film in the canon, 1973’s “Frenzy,” the first Hitchcock film to receive an “R.” The Curmudgeon, in an attempt to celebrate his receipt that year of his doctorate, made the near fatal mistake of taking his mother and sister to Oklahoma City to see the film; he was neither shaken nor stirred, but the matriarch went ballistic. (He could tell a few more stories from that era, but they are not fit for tender ears.)

There is no question as to the murderer’s identity. Jon Finch was quite good as the former squadron leader suffering from what we would now call PTSD and whose behavior would make any policeman suspicious. (Finch, a few years later, did a superb job as King Henry IV in the BBC adaptations of the Shakespeare plays.) I won’t name the actor who portrayed what we now call a serial killer. A performance which caught me by surprise at the time was that of Anna Massey who went on to do good work in such BBC classics as “The Palliserss.” Oh, yes, the director has two cameo appearances.

The film is still good, 47 years after release, but the trailer is almost offensive with its overdone humor.