The Curmudgeon has long been aware that he is a little too fond of massive epics, be they biblical, historical, science fiction, and other sub-genres prone to excess. One that he hasn’t fussed about during this summer of our discontent is an 1962 American version of Nikolai Gogol’s story published as either “The Cossack Chief” or “Taras Bulba.” 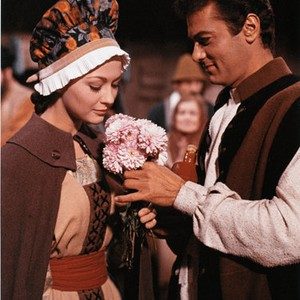 I had read the story a decade or so earlier, probably in fifth grade, but had almost forgotten it. The film came out during my senior year in college and I had to re-read the story just to brush up on the plot. That plot involves the love of a Cossack chieftain for his two sons, one of whom is very, very wayward; when the Cossacks make war on the Poles, the wayward son betrays the Cossacks for the love of a Polish woman. Yul Brynner was the perfect choice for Taras, but Tony Curtis was a little long in the tooth to portray a love-smitten youngster. (At least he didn’t repeat that ghastly line from “The Black Shield of Falworth”: “Yonduh lies the castle of mah fahder.”)

The dramatic scenes are well-done, but most people remember the film for its depiction of a massive gathering of the Cossack clans on their way to besiege the Poles; the soundtrack is still memorable. I will never forget that soundtrack because it led to the exposure of a plagiarist on the staff of the local newspaper. (Yes, we had newspapers in Oklahoma.)

The nephew of the editor of the local paper began writing movie reviews and many of them were well-done with just the right dash of acerbity.

The nephew’s review of West Side Story” set off alarm bells in my skull, but his review of “Taras Bulba” was too much; he had copied it almost verbatim from Time’s review of the film. Several people blew the whistle and the nephew “got out while the getting was good.” He had become lazy and, in his arrogance, assumed that no one in Ada, Oklahoma, would be reading movie reviews elsewhere. We never heard of him again.

Out of sympathy for the vicissitudes inflicted upon us by the virus, I am resisting the urge to repeat the puns that caused the uproar. Don’t expect such restraint in future reviews.