The Curmudgeon had planned to natter about some overlooked or forgotten westerns, but the shattering events in Minneapolis and other cities have turned him in a different direction. Hollywood has rarely given us serious films in depth about racism and violence in the streets, but one stands out: “The Siege,” with Denzel Washington, Bruce Willis, Annette Bening, and Tony Shalhoub. 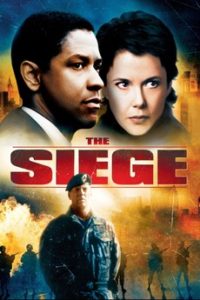 The film came out in 1998 and anticipated some of the worst events of the Iraqi invasion, but it is even more timely today because of its depiction of the consequences of a presidential decision to  use American troops to occupy a major city devastated by endless acts of terrorism and round up “all terrorists.” The crunch comes when FBI agents trying to stop the terrorism realize that their own families have been rounded up because of their ethnicity. (Tony Shalhoub is particularly good as a Lebanese-American FBI agent caught in that dilemma.)

The film is violent, but it is more timely than ever.