Best-selling author, Douglas Murray, holds a mirror to modern society in his latest book, “The Madness of Crowds.” As he takes a panoramic reflection across facets of culture, the glare is, at times, astonishing. Murray uses many present-day examples to show just how far the mainstream has moved. Ideas that, just a few decades ago, were considered outrageous, are now accepted without question. Terms and definitions that were all but unknown a few years ago have become common knowledge.

A trope utilized throughout the book is what Murray refers to as “St. George in Retirement Syndrome,” a metaphor coined by Australian political philosopher Kenneth Minogue. St. George is depicted as a legendary hero who sets out to slay dragons. Alas, the hero succeeds in killing the large dragons, and then the small dragons, until finally, there are no dragons remaining. So-long motivated by his drive to rid the world of dragons, St. George enters retirement with the same identity he always had – as that of a dragon-killer. With no beasts left to slay, St. George finds himself forced to become a hero in a new way. He must invent dragons where none exist, and even swing his sword into thin air, always ensuring that he remains a dragon-slayer.

Murray draws a parallel between this story and many modern-day social justice causes. In numerous areas, where there once existed a battle to fight and a problem to solve, the present day dawns on large resolutions of the issues and a turning from the past. Dissatisfied to acknowledge the progress on so many fronts, activists have looked for smaller and smaller and nonexistent dragons, until hints of microaggression and battles over terminology are the fight of the day.

For the modern St. George in Retirement, the existence of dragons is a must. The scaly predators justify the cut of one’s sword and make the defender both a victim and a hero – gaining the right balance of moral superiority and justification for any cause or movement. The modern St. George needs dragons so much, he or she will create them or pretend they are a problem even if they are not there.

In regard to race relations in the Western world, Murray likens the status of culture to a train that has just pulled near its desired destination, slowing down as it comes to a halt at the station. But suddenly, the train picks up speed again and begins careening recklessly down an unforeseen track.

In his inspired speech during the March on Washington in 1963, the Rev. Martin Luther King, Jr. made the memorable statement: “I have a dream that my four little children will one day live in a nation where they will not be judged by the color of their skin but by the content of their character.”

After the Civil Rights battle, ensuing legislation, and a time of healing, when we were collectively so close to such a state, culture took a different turn – one in which, contrary to the Rev. King’s dream, one’s ethnicity became more important than almost anything else. Stoking the fires of any racial tensions became a go-to motivator for those who would accomplish something by its aggravation. 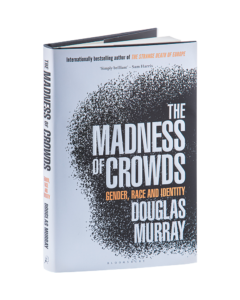 Unsatisfied to teach children and college students to value minority cultures, many academics set forth a new narrative of the wrongness of being Caucasian. “Whiteness studies,” is the study of white privilege, systemic racism and other negative areas, while studies of other races and cultures are lavish in their praise. Never mind that many Caucasian people and groups have contributed to make society a better place, and oppression and social inequality has existed within races and cultures across the globe throughout time. The game includes shaming one person for his uncontrollable traits, and praising another for his.

Individuality has also been eroded with the new identity politics. If a person does not vote or think within the stratified confines of his or her gender, race, class, or sexual orientation, that person is pigeonholed as a traitor. It’s hardly a defensible stance, but it has become normal.

Measuring privilege means taking in a subjective view of one’s heritage, nationality, and an “intersectionality” of traits. Pinning “privileged” on some and “victim” on others is unproductive and often quite incorrect. It also creates an unsolvable condition. If someone is always privileged or always a victim, why try? What use is there in personal ambition or goals? Labeling is demoralizing and takes attention away from potentially productive and uniting conversations.

Women in the last 100 years have worked to attain equality in areas ranging from legal clout to voting rights. Having achieved equality in a broad sense, fourth-wave feminists have moved to a new approach. They’ve labeled masculinity largely toxic. Phrases like “men are trash” and “kill all men” have trended among groups on Twitter. Of course, the phrases weren’t meant to be taken literally, the users said. Like with all identity politics, the speaker or writer who can paint herself or himself as the underdog is privileged with determining what certain rhetoric means. Others labeled “privileged” can be judged for any misstep mercilessly, but that is of no account.

Murray points out that women are excused for behaviors that men would not be. While women can tantalize, expose and tease, men who made the same uninvited advances would be viewed correctly as inappropriate.

Ironically, after so much progress in placing women on a level playing field with men, the definition of a woman has been remade with the introduction of the transgender woman. Now, saying a thing such as only women have menstrual cycles or give birth is considered blasphemy. It is considered offensive for a person to pretend to be another race, but is cause for celebration if they decide to be another gender. In fact, deciding one is another gender is likened to finally uncovering one’s true self without pesky biology getting in the way. The rules are contradictory and confusing.

The mood of broader culture has become offended, angry and retaliatory. How have we gotten to this point? Murray offers a few suggestions why, including the proliferation of online communication, which lacks the humanity of physical presence and tone of voice. There is also much to be gained by exacerbating divides and focusing only on certain points in history; some have little incentive to solve a said problem, but plenty of power and reward for perpetuating wounds.

Finally, Murray offers a suggestion: forgiveness. Forgive for the past and forgive more quickly than you become offended. Although Murray identifies as gay and his book is not based upon the Bible, his solution for society’s ills is a Christian one.