As an attorney who has represented devout defendants in some of the highest profile cases across the US, Luke Goodrich offers both a learned and a practiced take on some of the key religious liberty issues of our time in “Free to Believe.” He shares details of key cases from a variety of faith traditions, including Islam and Judaism. What is good and fair for one group is good for all of them.

Filling in the details of what many of us never learned in school, Goodrich offers a history lesson on religion in the early colonies, and what informed the First Amendment to the Constitution, the Establishment Clause. Having come from England where a state-sponsored church was the norm, colonists followed suit by establishing their own state-run churches. Taxes to fund the churches ensued, and persecution of out-of-power Christian denominations, including Baptists, followed. It is with that in mind that the Founders sought to prevent a repetition of government domination of religion, persecution, and citizen infighting that was so prevalent in England.

In their preclusion of a government religion, the Founding Fathers were anything but irreligious, as evidenced by their invocation of God and the Creator in the first two sentences of the Declaration of Independence, their incorporation of Judeo-Christian principles in law, and their frequent mention of faith in God and prayers in their records. They knew, however, that religious practice functioned best untethered by the strictures of state supervision and compulsion from authorities. 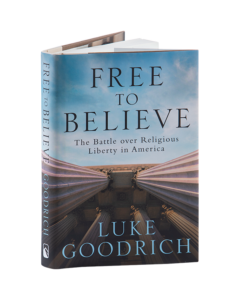 Goodrich impartially portrays the pitfalls of the early Christian groups in the new nation, and how they sometimes got it wrong. He illustrates different approaches to the faith, and how they are carried on today. Throughout the history of the nation, particularly within recent decades, key court cases have determined how religious liberty is interpreted in the United States. He delineates how not establishing a state religion has been translated in modern times into discriminating against faith-based groups, removing historic artifacts, and ignoring or eschewing wide swaths of history and civilization.

As views held by those in government have changed and religious faith has, in many regards, diminished in our nation, the tensions of religious expression and liberty within culture have become pronounced. Believing in Christianity – believing in anything – means not believing or participating in other things. The pressure to conform to new social mores has created a series of harbinger court cases in which religious organizations and individuals have been sued by private parties and threatened by government agencies. Matters involving sexuality and abortion are especially hot-button.

Giving recent examples, lessons from the Bible, and takeaways from his own observations, Goodrich provides ways believers can choose to respond to challenges within our current climate. He offers counsel toward maintaining the kind of good works the Bible commands while not being overcome by evil.

Like other great thinkers, Goodrich concludes that religious liberty must be protected because it is bound with all other rights. Telling another person what they can and cannot believe, and what convictions they may hold, is the ultimate form of tyranny.

While the judicial decisions of our land have not supported religious liberty in every instance, the concept is ingrained in the fabric of the United States and remains largely intact, Goodrich says. Still, threats are on the horizon at the national, state and local levels, and voters should become informed about these important issues.