The Curmudgeon managed to ruin the weekend of February 15 by seeing a fetid mess known both as “Birds of Prey” and “Harley Quinn and the Birds of Prey.” There is a third title, but no change in titles can redeem this cinematic atrocity. To say that it is trash is a slander against garbage pails and landfills. Many of the audience left within 15 minutes. I should have left; my stomach might be in much better shape. 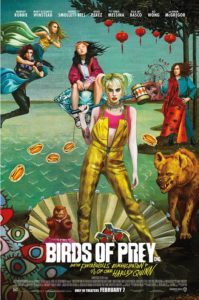 The comic book version of the “Birds of Prey” has a long and fairly honorable history; the original version of the female fighting force was organized by Oracle, the former Batgirl (not to be confused with the later Batwoman) after she was crippled by the Joker. Oracle/Batgirl was the daughter of Commissioner Gordon and had a PhD in librarianship, but had to become a computer whiz to be an effective crime fighter. She recruited Black Canary, Lady Blackhawk, and the Huntress and sent them out on missions. There is none of that in this film. Oracle is nowhere to be seen, and Harley Quinn, the Joker’s demented lover, is no substitute. Batgirl has since regained her mobility, but she is nowhere near her glory days of the 1960s and ’70s.

By the way, when the comic book version of “Birds of Prey” ended its run, Oracle, still in her wheelchair, managed to defeat the Joker in hand-to-hand combat.

My apologies for the long digression, but my stomach heaves whenever I start thinking about the film. Only those who enjoyed every horrible moment of “Suicide Squad I” could derive any pleasure from this piece of squalor. Please note the use of “I”; Suicide Squad II is in production. Be afraid. Be very afraid.