After far too many hours grading essays, the Curmudgeon crept out of his lair on January 25 long enough to see “1917,” a World War One epic about two British soldiers attempting to carry a message to an isolated commander that he should not continue on the offensive lest he send his soldiers into a death trap. Any resemblance to a certain ancient Greek trying to reach his home and family is intentional. 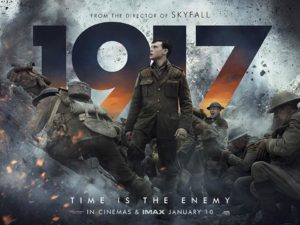 The film is very good; even though I did not recognize the two major actors, George MacKay and Dean-Charles Chapman, they are quite good. I did spot Colin Firth and Benedict Cumberbatch in cameo roles. Even more impressive than the acting, though, is the set. Whoever designed and built the trenches and battlefields deserves high praise. The opening scene leads the two major characters and the audience deeper and deeper into the claustrophobic trenches; Dante’s version of the descent into Hell is only slightly more harrowing. As for the battlefields, with their rotting corpses, human and equine, don’t ask. The film is relentless.

“1917” did receive the “best picture” award at the Golden Globes and is nominated for an Oscar. Many scenes resemble those in Tolkien, but the two films are very different. I am curious as to why no one has chosen to do a remake of Erich Maria Remarque’s “All Quiet on the Western Front”; that is still one of the best novels ever written about World War One and the old film with Lew Ayres is still worth watching.