Coaching Philosophy: “My philosophy is rooted in a Christian-based, positive approach to teaching collegiate track and field athletes, not only aspects of sport, but also values and traits beneficial beyond their time as collegiate athletes. At the same time, I want to nurture their dreams on and away from the track. Sports teach us so much about ourselves.”

Director of Track & Field/Cross Country, Theresa Fuqua, is among a small number of women who coaches both men’s and women’s track sports at her level. The programs have enjoyed much success, including having athletes qualify for the NCAA National Championship First Round.

Success in the sport is personal for Fuqua. “I began running in high school in Springfield, Ohio,” she said. “I was a six-time state champion in distances from the 800 meters to cross country. I signed in 1983 to run at the University of Houston. I was a four-time All-American in events both indoor and outdoor in my time at UH. I also qualified and ran in the two Olympic trials. In my last year of eligibility, I started coaching part-time at a local high school. It was my goal to eventually end up coaching in college. I consider it a wonderful fortune that I have been able to focus my entire career on coaching. Collegiate athletics educates us about who we are, what our place is in the world, and in many ways, defines our futures. This is exactly what collegiate athletics did for me.” 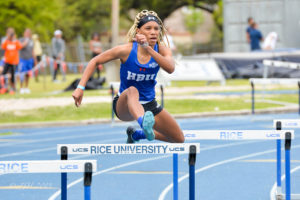 Sophomore Jessica Rabius, a mid-distance runner, said, “When I was going through schools and scholarships to choose from, HBU gave me a special feeling when I came on my visit. Coach Fuqua was especially a reason I was attracted to the program. Personally, I loved the achievements she accomplished in her running career, as well as what she has been able to bring out of her mid-distance athletes in the past. Coach T is able to give each athlete their own, personal plan that benefits them in the most ways possible. We are not treated as just a number; we are treated as people and as a family.” 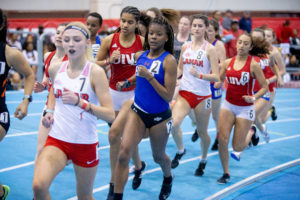 One of her proudest moments on the team thus far was being a member of the recent, record-breaking distance medley relay. “Being the lead-off leg at the Southland Conference Championship, I made T very anxious by going out ahead of pace, though she supported me through the whole leg of my race, coaching me and cheering me on through it. I was able to keep the pace to lead off the race 20 meters ahead of any other school in the race,” Rabius said. “In the end, we ended up being able to step up onto the podium.”

Kaitlin Smith, a junior who competes in multiple events, including the heptathlon and pentathlon, said, “Competing for HBU is different compared to other schools because our program is small enough to get a lot of individual attention from our coaches. We get the chance to build a relationship with them instead of being treated like a point value, which is great. I am so thankful for the opportunity to compete at this level.”