The friendly neighborhood curmudgeon, stuffed to the gills with good food, decided to try for at least two films over the November 30 weekend, but he wound up seeing only one. It, “The Good Liar,” turned out to be a good one, but it was not entirely what he expected. 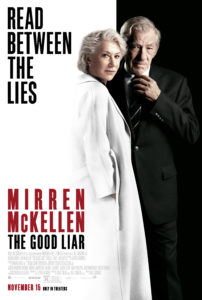 The trailers for the film implied that it was a geriatric version of “The Sting”: an elderly con man sets out to swindle an elderly widow and ends up falling for her; the twist is that she may also be trying to swindle him. The plot turns dark very quickly and violence shatters any idea that we are dealing with cute, nice, lovable people. Murder is the order of the day and the rom-com turns into a tale of revenge. Revenge, as the Romans reminded us, is a dish, unlike turkey, best served cold. The final scene is chilling indeed.

The cast is very good: Ian McKellen and Helen Mirren are very good as the elderly lovebirds, but Jim (“Carson the Butler”) seems a little out of place; he’s good, but I keep expecting him to reprimand the maid for not polishing the silverware.

The curmudgeon would have stayed to see “Knives Out,” but it was sold out. Better luck next week.