My coaching philosophy is about the development of young people. It is a privilege every day to see the growth in the young people I get to coach and mentor. I get to know my players and their parents years before I actually get to coach them in school during the recruiting process. God, family and program are what we always turn to for our staples. We believe in hard work on the court and giving back off the court to the community and our schoolwork.

In the US, volleyball has historically been a women’s sport, so it was fate that Trent Herman was introduced to the sport when he was. “I grew up in Kansas where they didn’t have boys volleyball in school,” Herman said. “I played basketball, golf and baseball. I picked up the sport of volleyball just before college and fell in love with the sport. I played volleyball at Fort Hays State University. I lost both my mom and dad when I was playing in college; I also became the legal guardian of my little brother. I grew up in a sports family. It is what I knew. My coach at the time talked with me about going into coaching. I had never thought of it as a career.” 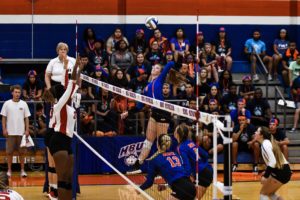 After graduating in 1999, Herman began to coach at the college level, first at Southwest Minnesota State University. At HBU, where Herman became the head volleyball coach in 2012, he found the perfect fit. “I have coached at big, public schools but miss the family feel of the campus and the interaction with the professors and staff. I want athletes to feel that they are part of something special. We provide a place where they can grow spiritually, academically, emotionally and physically.”

Kelly Colwell, a junior outside hitter, said the family atmosphere is what drew her in. “When I came on my visit to decide if HBU was the school for me, two big things stood out to me,” she said. “One was the girls on the team. Their culture and the way they treated each other like family was really important to me. The second thing was the coaching staff. We always jokingly call Trent our Dad!” 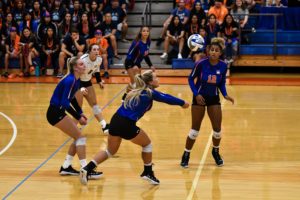 Junior outside hitter, Mikayla Vivens, said, “My coaches truly care about our success after volleyball, and are not just there to win on the court.”

HBU offers a unique combination of a small atmosphere with major competition, senior middle blocker, Megan Patillo, said, “You get a mix of the small campus experience, but the athletic program competes along with some of the biggest schools in the country.”

Hannah Lewis, a senior libero, said, “Going to HBU and playing for the volleyball program has been an amazing experience that I am so honored to have gotten the chance to have. I appreciate the program and the school for giving me a home for four years and giving me memories that I will never forget. As I go into my last season, I will cherish the time I have left.”