I had enough time during the October 12 weekend to catch one film, “Ad Astra.” I wish I had seen it on a larger screen or in 3-D, and I have to wonder how it will look on a television screen. 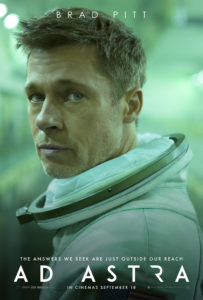 The sets closely resemble those of Stanley Kubrick’s “2001: A Space Odyssey,” and the plot owes a great deal to Kubrick; in fact, it also owes a great deal to Homer’s Odyssey. A son goes in search of a father who vanished more than 20 years ago, but the setting is the outer rim of the solar system rather than the ancient Mediterranean. Brad Pitt’s character is considerably older than Telemachus, and Tommy Lee Jones’ version of Odysseus has no desire to return to Ithaca/Earth.

Ithaca/Earth is in danger, but not from an excess of suitors; there are a few monsters along the way that make the Cyclopes look cute. There is no friendly goddess to intervene, but neither is there an insane computer.

The film drags in places, but I am glad I saw it. I don’t know if I will try to see the animated version of “The Addams Family” or “Gemini Man,” but they are on my short list.