Somehow I found time during the weekend of October 5 to see “Joker” even though I was less than elated by the opportunity. The film was notorious even before it reached the theaters; there was genuine concern that it might inspire a mass shooting. I now have to wonder if the studio PR flacks did not encourage that concern as a means of obtaining cheap publicity. 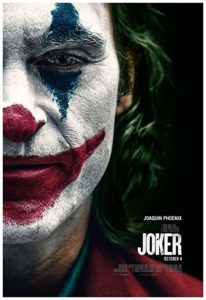 Joaquin Phoenix, who is no stranger to quirky, sinister characters, does well, but, except for Robert De Niro, I am not familiar the rest of the cast.  I will not be surprised if Phoenix receives an Oscar nomination, but I confess that I think Heath Ledger did far better in the Christopher Nolan version.

The film ignores much of the comic book lore built up around the Joker since 1939, particularly when it implies that the Joker is Bruce Wayne’s half-brother. That point is ambiguous at best, but it is an interesting supposition.

There is violence, but not nearly as much as the pre-release publicity implied; that violence is shocking and it makes the film difficult to recommend.