The weekend of September 7 was not one of my better ones and my choice of films turned out to be a waste of time and money, both of which are in short supply these days. I would have been much better off writing out tests and vocabulary exercises than seeing “It Chapter Two.” 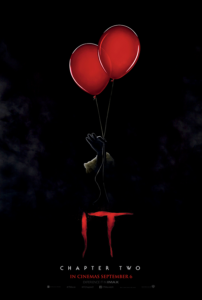 I did see “It Chapter One” a year or so ago, but the sequel is mediocrity personified. The cast is not bad, but James McAvoy and Jessica Chastain are wasted. Some scenes in the overly long film are guaranteed to leave you nauseated and some of the script is difficult to follow. (That might be the fault of my tricky hearing.) The creatures that infest the film seem to be based upon Hieronymus Bosch’s “The Garden of Earthly Delights” and other disturbing paintings.

I think you can see that I cannot recommend this turkey even though it is doing well at the box office. Let us hope that the upcoming, “Ad Astra” and “Downton Abbey,” will sooth my ruffled tail feathers on the September 14 weekend.