For former HBU cross country and track and field athlete Jamie Whitt Beckham, life these days no longer includes running as it once did.

Running still means a significant deal to Beckham, yet she and her husband are expecting their first child in late April, and she’s reasonably had to shift her attention away from the sport.

“I don’t run and compete as much as I used to,” Beckham said in late January, “but I do CrossFit now with my husband. That’s a big part of what we do every day. We’re there every day after work at the gym.”

Staying physically fit, as well as giving 100 percent maximum effort, has been a staple for Beckham throughout her life. Whether it was a 6 a.m. college practice, or nowadays an 8 a.m. patient session in her professional career as an occupational therapist at TIRR Memorial Hermann in The Woodlands, Beckham continues to give nothing less than her best.

“That was the biggest lesson growing up and in college – just to be dedicated to something and give it your all,” she said.

“My job as an occupational therapist is to meet a patient where they are now after a traumatic life event. With kids, it starts at birth, mostly,” Beckham said. “Just trying to help patients thrive and be as independent as possible. Really highlight their strengths and help them with their weaknesses. Help them to know that they can do what they want to do. It may look different now, but it’s still possible.”

Goals are established during every first patient session initial evaluation, and one of Beckham’s challenges is to stay creative for those goals to get accomplished.

“With the kids, if you don’t know what their interests are or what they’ll attend to, you’re not going to get anywhere with them,” Beckham said. “You have to be creative, and make it fun and entertaining for them to actually engage with you. It’s the same for the adults. If I’m just doing monotonous little activities, it’s not meaningful to them.

“I really try to get to the bottom of what is it that they want to do. It may not be in line with what I think they should be doing, but I’m going to look at what their goals are and help them achieve what’s important to them, because if not, it’s just a waste of time.” 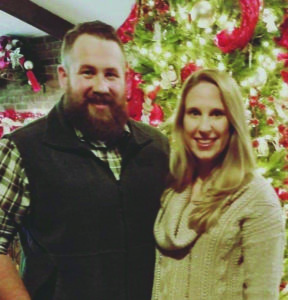 Since graduating from Houston Baptist in 2014, plenty of major changes have transpired for Beckham. She is now married, carries a master’s degree from The University of Texas Medical Branch at Galveston, works at a prestigious rehabilitation hospital, and is preparing for life as a mother.

She credits HBU for helping her get to where she is today and remains appreciative of the opportunities the school provided her.

“A lot of the academics, they challenged me,” Beckham said of her college experience. “Academics as well as being who I was as an athlete, as a student, as a Christian, just really letting me establish that, and knowing what I wanted to do and exploring all the different avenues to get there.”

As more life changes will continue coming her way, Beckham’s outlook is stronger than ever and she’s developed a clear understanding of perspective in the process.

“With my career,” Beckham said, “I chose it because there’s learning to be done daily. There’s always going to be something to learn. New techniques, there’s going to be new diagnoses. Always keeping up with what’s new out there because I want to provide the best care for my patients.

“As a person, I am now having a baby. It sounds terrible, but I only see bad things. You know, what bad could happen to an individual at work? I never see kids that are healthy, happy, like typically developing kids. I only see adults that have had traumatic life events happen. I always tell people that you love them because you never know when you won’t be able to again, or when your life is going to change completely from going to work, and the next day you’ve had a stroke and you can’t do anything on your own. So it’s about just living life to the fullest, but also being responsible and healthy.”

Beckham’s done that and more, and her forever Husky Family commends her for her success and efforts.