On April 6, I took a chance on the weather and headed for “Shazam!” It was much better than I expected even though it was also a bit longer than I expected. With the exception of a few scary scenes, it’s a good family film. 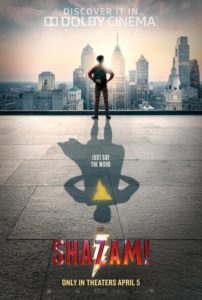 I did not recognize the cast members, but the actor playing the villain was better than the other actors. The villain is much nastier than he ever was in the comic books. In the comics, he was Dr. Sivana, the “world’s wickedest scientist,” a fitting opponent for “the world’s mightiest mortal.” In this film, he is the stereotypical CEO of a gigantic corporation, a position he attains by killing his family and the members of the board. He actually makes the Green Goblin and other power-mad executives look nice. Perhaps he will acquire some scientific training in a sequel.

The film actually begins with the origin of the villain rather than that of the hero. That’s an interesting twist as is the future hero’s reunion with his long-lost mother; it is not what you would expect. The special effects are better than I expected.

I saw the film on something called “Screen X.” The non-action sequences are shown on the normal screen, but the action sequences use the walls as added screen space; the audience is enclosed in the action. If I see another Screen X presentation, I may sit farther back; so far, I am underwhelmed by the gimmick. The screen image did seem sharper than usual, so that may be the best innovation. I strongly doubt that the DVD will have the expanded screen.

If the weather had been better, I might have stayed for the new version of “Pet Sematary.” The first version was scary enough, and I still don’t see the need for a remake.