I had reservations about what to see on March 30; I had little or no enthusiasm for “Dumbo,” so I chose “Hotel Mumbai.” I might have overlooked the film except for seeing it mentioned on PBS. It was a very depressing film, but I expected that. 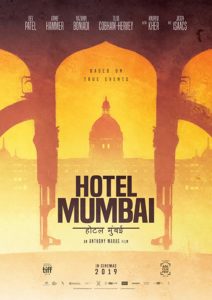 The film is an Australian production based upon the horrible massacre in Mumbai, India, several years ago. Although there were at least 10 sites attacked by terrorists, the Taj Hotel lasted the longest and received the most media attention. Even though I knew the outcome, the story was compelling.

I only recognized Armie Hammer, Dev Patel, and Jason Isaacs among the cast. Isaacs makes his Russian colonel far more menacing than he ever was as Lucius Malfoy in the “Harry Potter” films. The film tries to keep track of several groups in the besieged hotel, but Patel’s Sikh waiter is the central character. In this respect, the influence of “The Towering Inferno” and other disaster films is clear. (You could also make a case that the hotel itself is a character.)

The film is very effective in a theater, but the DVD should be just as good.