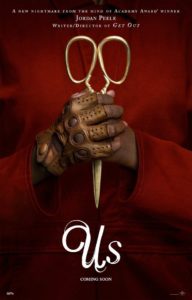 I remember being deeply impressed by Jordan Peele’s “Get Out,” so I needed little inducement to see his “Us” as part of the March 23 weekend. To say the least, my nerves were thoroughly jangled.

The film deals with several of children’s darkest fears, particularly, the fear of abandonment and of whoever or whatever lives behind the surface of mirrors. The talented Lupita Nyong’o carries the film; her character’s irresponsible parents allow her to stray away at an arcade and something horrible happens in the hall of mirrors. When her adult family visits the same arcade, very bad things begin to happen. I figured out the problem very soon, but that did not keep me from enjoying everything.

Nyong’o is emerging as a major actress, but I have to wonder how someone like Halle Berry would have handled this role. The rest of the cast, particularly the juveniles, are very good. I wish someone had explained why the young boy persisted in wearing a devil mask; perhaps that is the seed for a second film.

I think you could wait for the DVD, but the film is worth seeing in the theater, particularly since the trailers include the first official trailer for “Avengers: Endgame.”