I was somewhat reluctant to see Liam Neeson’s latest thriller, “Cold Pursuit.” I have respected Neeson since his debut in the 1970s, but his recent toxic, racist outburst has, to put it nicely, damaged his reputation. He has apologized, but his career may be over. 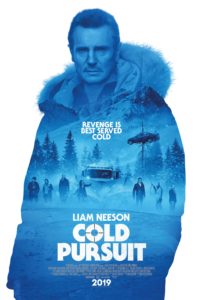 “Cold Pursuit” is not a bad movie, but I was not impressed. I have not read the original novel and I have not seen the film upon which this version is based; I do not feel any sense of urgency to fill those gaps in my knowledge. The original Scandinavian setting has been relocated to the Denver area, but the scenery is from British Columbia. There may be some logic to that, but I don’t see it.

Neeson plays a popular snow-plow driver who spends his days scraping down the highways in the high Rockies; that makes his physical exploits somewhat credible. The idea of an elderly man taking on several young and healthy drug dealers with one or two punches did strain my credulity. (Actually, this leads to one of the funnier scenes.)

Did I say “funnier”? The film switches gear from domestic tragedy to dark comedy which was not a good idea. The villain, sinister at first, becomes a bad parody of Al Pacino in Scarface.

The film could have been worse, much worse, but that is not a strong recommendation. Neeson fans should just dig out the DVDs of the “Taken” trilogy.