The only film I saw during the weekend of February 2 was Peter Jackson’s “They Shall Not Grow Old.” I was slack-jawed.

The film is a documentary commemorating the end of World War I and consists of footage from that war; we have seen much of that footage over the years, but Jackson and his engineers have wrought a miracle by cleaning and repairing the film. In addition to restoring the old footage, the technicians have added a sound track and color. The cleaning of the old stock is particularly valuable since details, long obscured, have been revealed for the first time in decades. 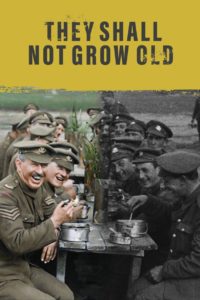 There are no continuing characters, but the soldiers, in their ordinariness, become very real. The knowledge that we are watching men charge into almost certain annihilation adds a piquancy that no scripted movie can ever attain. Much of the film centers on the Battle of the Somme, one of the worst examples of incompetent commanders I have ever known. I have seen the battlefield several times and the memories still fill me with gloom.

I saw the 2-D version and I am not sure I could have taken the 3-D version. The shots of dead or dying soldiers and horses reminded me several times of Wilfred Owen’s powerful poem, “Dulce et Decorum Est.”

I did not appreciate the amount of screen time wasted by Fandango, but once the film starts, such nonsense is forgotten. When the actual film is over, there is a 30-minute segment on how the footage was restored. I found it fascinating and a good way to come down from the highly emotional state engendered by the actual film. I will acquire the DVD as soon as it comes out.