I only had time for one film during the weekend of January 19 and it turned out better than I had expected. I usually enjoy the films of M. Night Shyamalan, and his “Glass” is enjoyable, but only if you have also seen “Unbreakable” and “Split.” I need to review those films on several points, but that is something for another day. 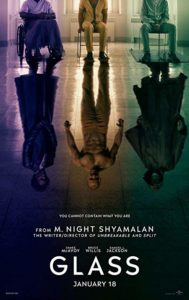 Bruce Willis is more taciturn than usual as the reluctant overseer, James McAvoy chews every carpet in sight as the many personas who inhabit his mind emerge, and Samuel L. Jackson is very good as Elijah Price, the manipulative villain who creates all the havoc he can while confined to a wheelchair.

Whether there will be a sequel is a big question. The story reveals the existence of a much more dangerous menace and hints at the possibility of a new generation of heroes; that may be enough to satisfy Shyamalan’s fascination with comic book characters, or he may want to expand his ideas.

Shyamalan’s reputation will rise or fall because of “The Sixth Sense”; the comic book trilogy is interesting, but not essential.