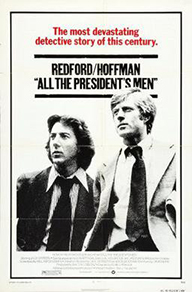 The weekend of November 30 was as parched as a Gila monster’s throat, at least as far as new movies were concerned. Perhaps Hollywood doesn’t think it’s smart to release new films during final examination times. I could have used the time to see “Widows,” but opinion on campus seems evenly divided; it’s either “very good” or “absolutely terrible.” I had no trouble deciding to miss the latest incarnation of “Robin Hood”; the Kevin Costner version stretched the limits of credulity and the trailers for this one seemed to trample on the original legend even more. I decided to err on the side of caution and stay home with some good books and a DVD or two. The one DVD I watched over the weekend was “All the President’s Men.” I winced when I realized that I had not watched it in over a decade. The ending still strikes me as rushed, but the performances still seem nuanced.

What will I be watching during the Christmas holidays? “Schindler’s List” will return on December 7 and I plan to be there. I also have my eyes on “Mary Poppins Returns” and “Aquaman” between now and New Year’s Day.