After I saw at least two interviews of Spike Lee on CBS and PBS, I decided to see his new film, “BlacKkKlansman” (Black Klansman), on August 11. It has been a long time since I have seen anything as powerful. The final scene was as cathartic as anything Aeschylus or Sophocles ever conceived. It was several seconds before anyone in the audience said anything. 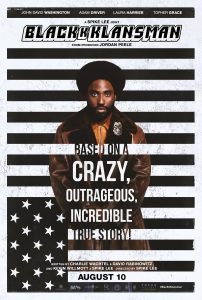 Some of the interviews and early reviews suggested that the film is a comedy. The basic plot, an African-American infiltrating the Ku Klux Klan, does sound, at first, like a routine by such comedians as the late Godfrey Cambridge or Richard Pryor, but the film is deadly serious. Yes, it is fiercely political and polemical, but we always expect that in a Spike Lee film. His point is that the events of the 1970s foreshadowed our current racial problems.

I am not familiar with John David Washington’s films, but he does well as the Colorado Springs policeman who fooled the local Klansmen. Adam Driver is exceptionally good as the partner who helps him; he should be considered for a best supporting actor Oscar.

The language and violence in the film justify the “R” rating, but it is certainly one of the most important films of the year.