HBU Relief Fund
Like many across Houston and the region, members of the HBU family were touched by Hurricane Harvey. Please consider making a gift to affected HBU students, faculty and staff at HBU Relief Fund.

By the time the rains from Hurricane Harvey had fallen heavily for almost two days, Aubrey Aldave, administrative assistant for HBU Spiritual Life and Discipleship, knew there would be a big day ahead. She and her husband, Daniel, woke up the morning of Sunday, August 27, and began the day with prayer and worship. 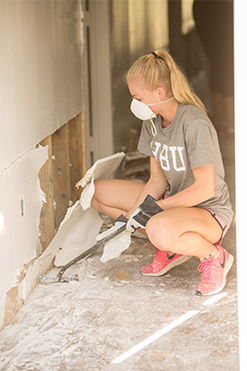 Their prayer time was soon interrupted by a phone call. The Aldaves function as the CARES Team, or community-builders, for an apartment complex along Brays Bayou. In the absence of the apartment manager, they were asked to be the point of contact for residents.

“The rain came so fast. We were getting calls all day,” Aldave said. “When we walked around and checked on people, it was stressful, but I also had the feeling, ‘This is why we’re here. The Lord’s going to equip us to do what we need to do.’ I became energized.”

Throughout the week, the Aldaves hosted and housed several people in their second-floor apartment, including a friend who had put a few items in a plastic bag and waded over from a neighboring complex in water nearly to her neck.

“It was one of those times where the reason for building relationships with people for months made sense and it paid off,” Aldave said. “We were networking with people on the second and third floors and asking for them to make room in their homes.”

At the end of the week, Aldave was exhausted. Yet, she marveled at the faithfulness of God.

“The Lord provided resources so we could feed people. One man even brought us pizzas through the water,” she said. “It was a chance to see neighbors taking care of neighbors.”

During the deluge, Head Track and Field Coach Theresa Fuqua kept up with her players, several of whom were hit by the flooding, and contacted friends to make sure everyone was okay.

“It really hit close to home,” she said. “The images were heartbreaking, and, like many on our staff, I and my team simply wanted to help.”

When some areas were safe, Buffalo Bayou swelled as a result of controlled reservoir releases. College of Science and Mathematics Dean and Professor of Chemistry Dr. Doris Warren had 13 inches of water flood her home and total her vehicle when that happened. She and her neighbors had to be rescued by boat.

After the storm, however, a team led by Dr. Michael Rosato, associate provost for Academic Affairs and professor of Education, cleared out her house. A number of other people in the HBU family helped Warren, who has served HBU since 1967.

“Emotionally, I was really in shock,” Warren said. “The good Lord sent people to help me at the right time.”

Fuqua’s group visited homes in the Braeswood area and helped homeowners clear out damaged items during the course of several days.

“To say I am proud of my athletes is an absolute understatement,” Fuqua said. “I tear up today as I think back to how happy they all were to help.”

After Harvey’s winds and rains subsided, Jud Kinne, HBU assistant men’s basketball coach, was dealing with damage and leaks in his home. Still, he rallied with others on the Athletics staff, his team and members of the baseball team to assist others who were affected more profoundly.

The group helped clear out about 30 homes, primarily in the Meyerland and Sharpstown neighborhoods. They loaded items that could be moved to temporary housing and pulled out flooring, drywall and insulation.

“I could not believe the level of devastation many people experienced,” Kinne said. “It was not only devastation to property, but to lives and psyches. We felt like helping those who needed it was the first step in their healing process, and hopefully we were able to brighten the lives of a few families.”

Candace Desrosiers, ’94, associate vice president for Alumni and University Relations, was displaced from her Meyerland home after catastrophic flooding.

“My husband, Keith, and I are service-oriented, and we both value investing our time and talents in people and projects. Through this, we have learned that we are in a season where we need to be nurtured and helped,” she said. “We desperately miss our home, our neighbors, and the routines that are so comforting to us as a family. We are grateful for the many people and groups who so generously helped us through sweat equity, meals, pet-sitting, housing us, giving care packages, gift cards and simply reaching out. Each act of kindness and concern has sustained us and reminded us of how truly loved we are. We have incredible family, friends and colleagues who we do life with, and we believe in a God who is much bigger than the storm.”

“Seeing our staff, faculty, and especially the students and athletes working together was so heartwarming,” she said. “I was proud of the HBU family.”

Jesse GrothOlson, assistant professor of Cinema and New Media Arts, dealt with a foot of water in his home and the loss of a vehicle.

“We have been displaced for the foreseeable future,” he said. “I have had colleagues and students come to my house over the course of many days to help muck it out and catalogue all of our belongings. Harvey affected all of us, and in all of it, God is asking each of us, ‘Do I have a larger place in your life than your circumstances?’”

Professor of Christian Thought Lee Strobel, whose Woodlands Church mobilized thousands of volunteers and performed more than 100 water rescues, said, “Someone said there was more love than water in Houston, and that’s certainly right. It was inspiring to see the people of God rise up to selflessly care for others in the midst of this tragedy.”

In the aftermath of the storm, HBU set up a Relief Fund to ease the burden on members of the University family who were affected.

Vice President for Advancement and University Relations Sharon Saunders said, “A significant number of faculty, staff, alumni and friends have made sacrificial gifts to be part of this relief effort.” About 45 percent of donors have been first-time donors, and many friends of the University from outside of Texas have given as well, Saunders said.

Head Women’s Basketball Coach Donna Finnie said her team came together to comfort one of the players whose family home was devastated. The team also collected items for families and read to children in shelters. Additionally, they helped several elderly residents clear out their homes and pack up their belongings.

“I have met many new people from helping after the storm,” Finnie said. “It’s been so humbling, and it’s made me and our players appreciate what we have. The biggest thing I’ve taken away from it is that there are so many great people with huge hearts in our area, and at HBU. To see how our students and staff pulled together was incredible, and makes me so proud to wear the orange and blue!”

While much work has been done, there is still more to go until people’s lives return to normal and their homes and possessions are restored.

Aldave said the fruit of working together and investing in others will endure.

“We had a guestbook during the week of the storm that we asked people to sign,” she said. “One woman wrote, ‘Harvey has brought us together.’ I think she is right. No one would ever say a hurricane is a good thing, but I’ve seen really good things because of it. The need isn’t over, and I think Houston will continue to see good things as people keep serving. There will be opportunities for people who love Jesus to love their neighbors well for a long time.”