College in the Cloud – Part 2

Few can argue that the digital arena has transformed our culture. Sites like Amazon and eBay have forced traditional retailers to adapt to the new digital age or close, Netflix and Smart TVs have led to a declining number of cable television subscribers, and many view a landline as redundant to a mobile phone.

Higher education is no different in its need to meet the demands of the 21st century individual. In 2014, entrepreneurial HBU President Dr. Robert B. Sloan spearheaded an initiative to significantly expand HBU’s online program and make it comparable in quality to its on-campus offerings. Thanks to several generous donors, $7.5 million was raised to duplicate its more than 1,000 “residential” courses over the next decade and significantly expand the reach to students, enhancing HBU’s educational enrollment. HBU’s online programs are expected to increase the number of students by 10,000 in less than 10 years. 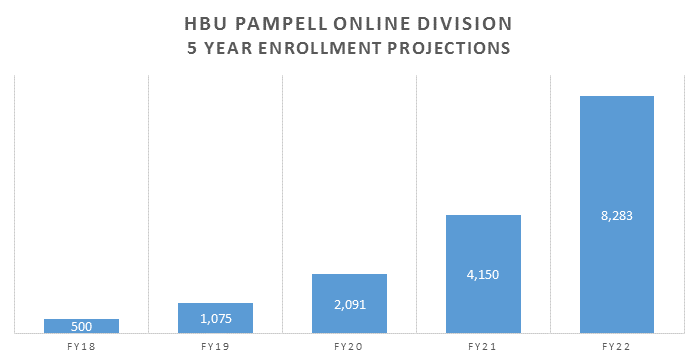 Titled the Pinky Pampell Online Division, the program is named for a donor whose commitment to Jesus Christ inspired a $5 million donation that makes the expansion possible. “HBU is investing heavily to take our world-class, Christian-based, university education and offer it outside the 152 acres of the campus in Houston,” said Dr. Jerry Johnston, vice president of innovation and strategic marketing. “In five years, we hope to be among the world’s finest online, Christian-based universities.” The vision does not stop there – future plans are being developed now for HBU online programs to be offered internationally.

Dr. Sloan’s foresight about a cutting-edge online program is critical for HBU. Many experts believe higher ed – as with other industries – must change or become obsolete in as little as two decades. In a January Wall Street Journal column, David Gelernter asserted that online education can provide a robust learning environment.

As a computer science professor at Yale University, Gelernter emphasized that an online “course grows better and deeper each time someone ventures through it.” Sophisticated software, digital guides and online mentors, he asserted, can favorably alter the way a student can navigate a course. And when a student completes a class, Gelernter said it becomes a “valuable digital object,” which the individual can later reference.

HBU Professor Sara Frear believes online courses can enhance a student’s critical thinking. “I believe the greatest benefit is the opportunity for in-depth exploration of course content via online discussions. With the written format and in the absence of time constraints, students have the opportunity to reflect on the meaning of the events they have studied, and to exchange ideas with the instructor and with fellow students.”