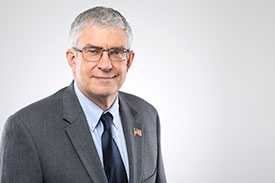 Dr. Craig Evans, John Bisagno Distinguished Professor of Christian Origins, and Dr. Jeremiah J. Johnston, associate professor of Early Christianity and president and founder of Christian Thinkers Society, a resident institute of HBU, last week published a column on the Fox News Opinion web page. “Was there a Jewish Temple in Jerusalem? Were the Pyramids built in Egypt?” has been viewed by hundreds of thousands of readers and was the number two trending item on Fox News Opinion, having garnered a huge response. Evans and Johnston make the important point that peace in the Middle East cannot be achieved unless both sides tell the truth. The Islamic claim that there never was a Jewish temple in Jerusalem is not only demonstrably false historically, it is an impediment to the peace process, in that it advances the notion that the Jewish people were not present in the Holy Land in antiquity. The opinion piece by Evans and Johnston is quite timely given the ongoing violence and demonstrations relating to the Temple Mount in Jerusalem.