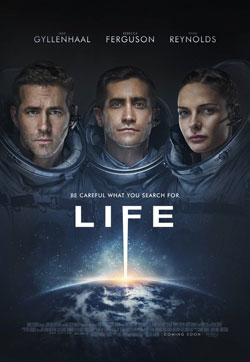 After gorging on five films during spring break, I had to moderate my pace.  Hollywood cooperated by releasing very few films for the March 25 weekend.  The only one that piqued my interest was Life;  I knew from the trailers that it is a combination of Gravity and the Alien series.  It is not as bloody as the various Alien films, but it has its moments.  The special effects are good and the cast is reasonably good.

Mars is very much in the news these days, but people who are uneasy about what we might find there will find this film to be a reinforcement of their queasiness.  There is something very nasty lurking in the sands of Mars, something so nasty it destroyed all life on Mars and would like nothing better than to find a new source of food.

The “organism” is cute and cuddly at first; the astronauts even give it a human name, Calvin.  I suspect that the name is taken from that very evil child in the old comic strip, Calvin and Hobbes.

Since another prequel to the Alien series is coming this summer, you might be able to skip this one or wait for the DVD; if, on the other hand, you don’t want to watch another gut-wrenching scene (and the trailers indicate that at least one of those will be included), this might be a milder substitute.