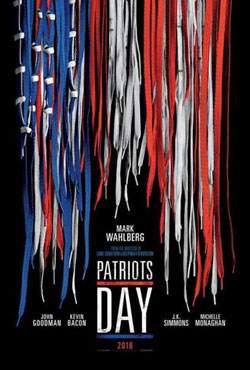 I only had time for one film on January 21 and chose Patriot’s Day; I had expressed reservations about the film after I saw the first trailers and I still have questions about our readiness for a re-enactment of the bombing of the Boston Marathon in 2013.  It may be that we can never be completely ready for such re-enactments.

The film is not bad, but it never jells;  it is neither a drama nor a documentary. A major flaw is the notable lack of a central character despite Mark Wahlberg’s role as a composite of several people who were involved in the events of that horrible week.  Very few of the characters are adequately delineated and some are poorly identified.  We never learn how the two terrorists became radicals and the victims never become characters.

I don’t regret seeing the film, but I wonder if I might not have been better off seeing Silence or Split.