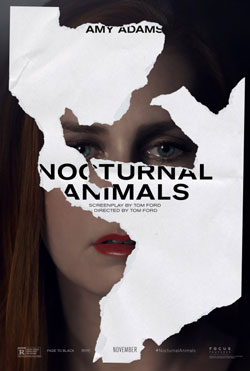 I almost walked out of the theater when Nocturnal Animals started.  The opening sequence is one of the most degrading and disgraceful things I have ever seen.  I still have a strong sense of revulsion roiling my stomach.  I know the film has won a prize or two already, but I really have misgivings about the standards used by the judges.
Once that scene was over, the rest of the film was reasonably interesting.  It involves the manager of an art gallery, Amy Adams, who receives the manuscript of a novel by her first husband.  The novel describes a violent encounter in the Texas desert between a family and a pack of marauders.  We see both the events of the novel and their impact on Adams’s character.  The novel is obviously autobiographical; Jake Gyllenhall plays both the fictional husband and Adams’s ex-husband.

The plot of the novel reminds me of such films as Cape Fear, The Desperate Hours, and similar thrillers involving families in danger.  The cast is good; Adams’s performance is a sharp contrast to her other recent release, Arrival. There is quite a bit of violence, but I have seen worse.  My big problem with this film is the ghastly opening.