I saw two very interesting films on the November 12 weekend:  Arrival and Hacksaw Ridge. I recently expressed doubts about the latter movie; I have to confess that I was terribly wrong. 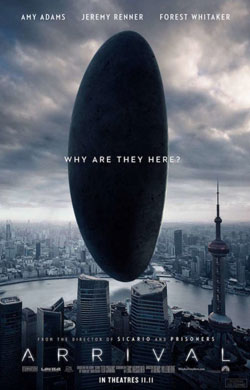 I started with Arrival, a film very similar to The Day the Earth Stood Still; 2001: a Space Odyssey, and Close Encounters of the Third Kind.  How do alien species communicate with each other before they start killing each other?  Amy Adams plays a linguist (xenolinguist?) who is trying to recover from the death of her daughter while she struggles to comprehend the alien language. (The story turns on the distinctions between “tool” and “weapon.”)

To complicate matters, the aliens are neither cute nor cuddly; in fact, they resemble something out of H. P. Lovecraft’s worst nightmares.  It is easy to understand why some other nations would assume the worst and begin to attack the twelve alien vehicles hovering over the globe.

There is not much action, but there is a great deal of dramatic tension.  I definitely need to see this again; I think I know what was going on at the end, but I do feel some uncertainty. 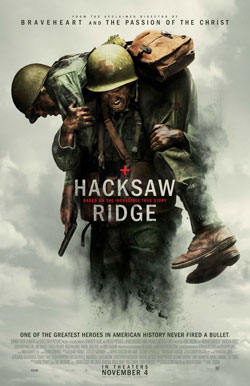 There was far more action in Hacksaw Ridge, much of it gruesome to the extreme.  At first, it resembled several movies from the 1940s with protagonists who moved from clumsy farmboys barely able to survive boot camp to military heroes who almost win World War II single-handedly.   The film is much darker than that.

Andrew Garfield, better known until now for his two tries at playing Spider-Man, is brilliant as the young man who, for good reasons, renounces violence and refused to touch any sort of weapon.  He wants to serve as a medical officer, but his fellow recruits assume he is nothing but a coward and torment him without mercy; they even mock him for studying his Bible.

Almost half of the very long film deals with the young man’s early life and his experiences in boot camp; the rest covers two days from the last stages of the battle for Okinawa.  The carnage is horrendous and some members of the audience left.  Very little is left to the imagination.  Of course, our long-suffering hero achieves respect and glory for his efforts at saving his fallen soldiers, some of whom were his most vicious tormentors.

I still have severe doubts about Mel Gibson’s moral qualities, but I have to admit that this film is far better than his earlier war film Gallipoli. It is very strong on spiritual values, but the violence may be too strong for some.